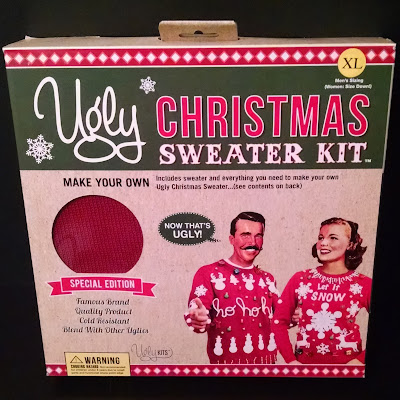 The intentionally ugly homemade Christmas sweater worn ironically is something of a trend these days. This prepackaged kit is intended to streamline the process of making your own: it comes with a plain red sweater and a pack of assorted holiday-themed materials. I picked this up after Christmas last year when the price dropped below ten bucks. Normally, it goes for around twenty-five dollars. 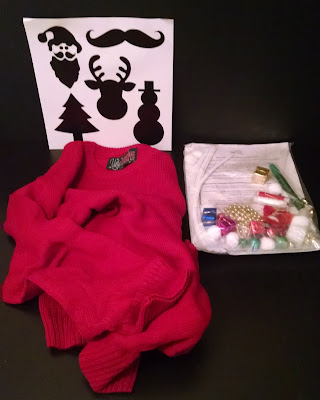 The sweater is made of relatively thin fabric, which is probably appreciated by anyone wearing one of these at a Christmas party where the thermostat's set higher than seventy. The sheet of black shapes is intended to be used as a set of stencils. There's a piece of white felt you could cut up and include, though I didn't bother. Here's a better look at the included materials: 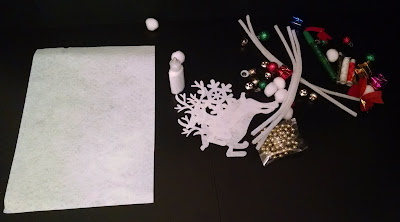 None of this stuff is especially high quality, but it's not really supposed to be. You could assemble the same arts and crafts supplies at a dollar store for next to nothing then pick up a used sweater at Goodwill and put together something as good or better. But the kit's not meant to save money; it's supposed to save you the time and effort of collecting all that stuff.

Actually, it's probably intended as a gag gift that will never be used. To their credit, they provided enough supplies to build an ugly sweater. The kit even comes with glue, needles, and thread: nothing essential is omitted. That said, they don't provide much in the way of instructions - just a simple sheet of paper with some suggestions. 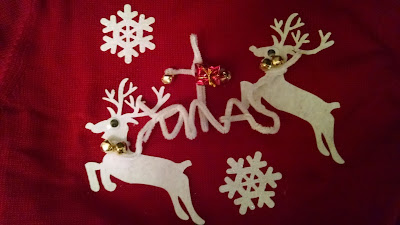 I showed a little restraint in my design, though I am proud that the pipe cleaners spelling, "XMAS" rise off the surface of the sweater. Also, I've always thought the cross needed jingle bells. And for those of you wondering, the present in the center of the cross does not symbolize the gift of salvation: it's just a toaster.

I considered adding more, but I felt like anything else would have drowned out the elements I liked. Of course, if I were really invested in this, I'd dig into the Mainlining Christmas reserves and add working lights, real candy-canes, and plastic trees. Also, I'd consider picking up an inflatable Frosty and maybe a snow globe. But I really wanted to limit this to the things that came with the kit. 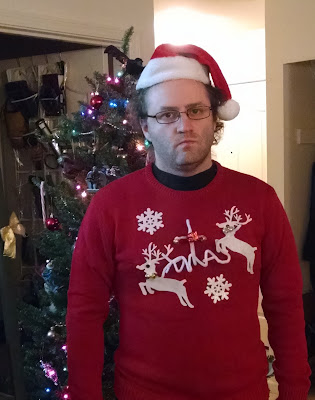 I'm pretty happy with how it came out, as you can see above. I'm not sure I'd recommend this as anything other than a gag gift, but if there's a hipster in your life who's too lazy to buy their own supplies, wait until February and pick them up one for Christmas 2016. I'd suggest getting one for this year, but - honestly - you'll get a better price if you hold out. And it's not like there's any danger of these going into style.
Clothes Erin Snyder