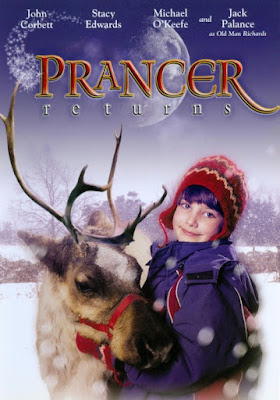 I'd like to offer more context for this direct-to-video sequel to the quasi-classic 1989 film, but there seems to be very little about the movie online. Searching for "Prancer Returns" on Wikipedia just redirects to the first movie, where there's a brief mention of the sequel's existence. IMDB has the cast/crew listed, but not many details.

I don't think a single actor or character shows up in both films, which is a little odd actually. They take place in the same small town just ten years apart, and the events of the first movie have been elevated to a sort of legendary status. We're told several major characters remember the events, but only one - Old Man Richards, played by Jack Palance - claimed to know the family directly. Ten years in a town that size is a drop in the bucket: it's a little surprising none of the previous characters were still around and odder still no one seemed to know what had happened to them.

While none of Prancer's actors seemed interested in appearing in this, the writer came back. Greg Taylor is a name I should probably just learn - in addition to the Prancer movies, he also wrote Santa and Pete, as well as a few other Christmas movies we haven't gotten around to yet.

This was directed by Joshua Butler, who seemed to spend a lot of the movie trying to demonstrate his horror chops. Halfway through, I looked him up on Wikipedia to verify that was his main genre. Not surprisingly, I was right - he's done a lot of low budget horror movies and TV.

In his defense, he seemed to know how to line up a shot. The movie looked decent, which isn't guaranteed at this budget. Before you start thinking this is heading in a positive direction, be aware his storytelling chops weren't so well developed: the movie moves at a glacial pace, several characters come off as two-dimensional cliches, and he apparently just told the lead kid to whisper everything softly and call it acting. But all of that looked fine, and the cuts between real reindeer and puppet heads were well executed.

Enough about the technical side of things, though - let's talk about the story. This one focuses on a boy who's recently moved to town with his brother and their newly-divorced mother. The older brother spends a lot of time angsting about wanting to move back to Chicago and live with his dad, while the younger - our main character - is having trouble making friends. He learns about the legend of Prancer from a local love-interest for his mom, then comes across the reindeer after being held in detention by the comically evil vice principal.

The twist is that Prancer dies a few minutes after we meet him. Instead, the kid adopts Prancer's son and names him after his dad. Okay - I have to admit I didn't see that coming. The whole thing might have carried more impact, however, if Prancer hadn't vanished in a flurry of magic snow upon dying.

The kid takes Prancer, Jr. home and hides him there for a few days. Given he lives in a relatively small house, it worked far better than it should have. Eventually, his brother finds out and convinces him to move the deer somewhere else before their mom finds out. I'm not entirely clear on how she missed the odor of the reindeer crap conveniently omitted from the film's narrative.

The kid drops Prancer II off at Jack Palance's farm (they became friends earlier when... just roll with it). But instead of staying there, Prancer invades the school, then bites the evil vice-principal to protect the kid. The vice-principal locks Prancer in an empty room then calls animal control, but the kid breaks him out. They go on the run and hide out in the woods. There's a search party out looking for the kid, but they stop looking when it gets dark. For some reason.

The kid's fine the next day, but he decides Prancer needs to fly off now. While trying to get him to try, the kid falls off a drop and ends up wounded. Prancer, of course, pulls a Lassie and leads the kid's mother (and mother's love interest) to him. The kid goes to a hospital while the reindeer is taken to the animal shelter. It's unclear why the vice principal's main goal in life suddenly shifts to making sure the deer that bit him is put down, but it happens fairly abruptly (before this, it was to bang the kid's mom).

The love interest calls in the press, and - given it's the night before Christmas Eve - there's suddenly a lot of pressure on not killing a reindeer that saved a kid who swears it's the son of one in the town's local legends. Still, there's no push to release the deer, either. So the kid, aided by some classmates and Jack Palance, stage a heist to break Prancer out, so it can fly up and meet Santa. There's a little more noise and conflict, but everything resolves as you'd dread - Prancer goes off to take his father's place as Santa's sleigh visibly leaves a comet trail through the center of town, removing any ambiguity or question as to the existence of Santa or magic.

Overall, the production values were decent, the writing was mixed, and the pacing was tedious.  But, hey. They actually offed one of Santa's reindeer in a kid's movie, so I guess that's something.

It was nowhere near the level of the first (which wasn't exactly brilliant to begin with), but it was better than most direct-to-video holiday productions. I wouldn't recommend it, but there are worse things out there.
00's Comedy Erin Snyder Fantasy Movie