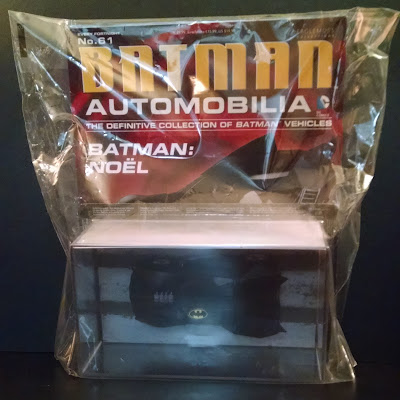 Eaglemoss Collections has been producing a line of die-cast Batman vehicles for a while now. I own a handful I've picked up over the past two years to supplement my collection of Batmobiles. This one's getting special attention, however, because the design is lifted from the story, Batman: Noel, a re-imagined version of the Christmas Carol which wedges the Dark Knight into the Scrooge role. 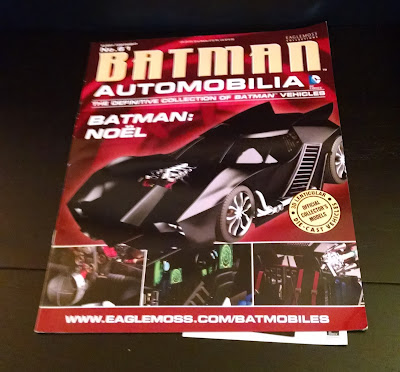 I'll get back to the car in a moment. First, it comes with a very short magazine. It's only ten pages long, counting the four-page fold-out in the middle, but it's heavy stock. The content is intended to provide both information about the car itself and the context of the character at the time. 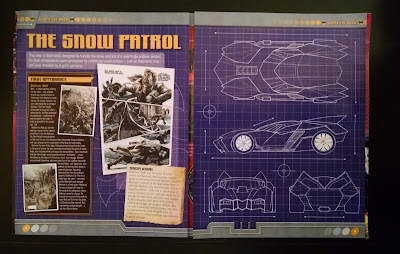 I like the blueprints, though some of the text in here is a bit absurd. Passages like, "This was a Batmobile designed to handle the snow and ice of a seemingly endless winter." Likewise, there's a complete breakdown of all the crime-fighting gizmos built into the car, almost none of which are hinted at in Noel, and - as far as I know - this version of the car hasn't appeared anywhere else since. Likewise, there was really nothing in Noel that implied this Batmobile was in any way designed for the winter, at least not any more than any other version of the car.

Batman: Noel offered unique designs for Batman and his car, but my impression was that those were artistic, not practical alterations. To my eye, it's a sleek, realistic muscle car, not "a Batmobile designed to operate in a city caught in the icy grip of winter." But, hey - more justification for writing it up here, I suppose. 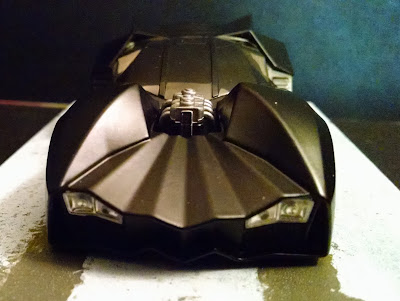 Eaglemoss did a good job recreating the look of the car. They use a mix of plastic and metal (everyone does these days). Overall, the vehicle does look a little flat - using a metallic paint would have given the surface more texture - but I'm really digging to find anything to complain about. Overall, this is a fantastic looking car. 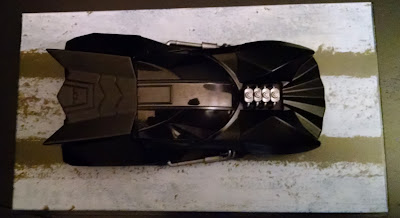 You'll notice the car is always displayed on its base in my photos. It's attached with two small screws on bottom. I'm sure those could be removed easily, though I don't see any reason why you'd bother. This is more a statue than a toy car: the wheels don't even seem to turn. I don't consider that a problem - I'd rather have toy cars built for display than play - but it's worth noting. 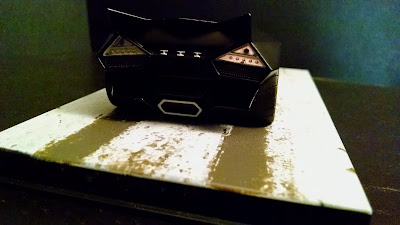 The base is painted to look like a snowy road with tire tracks. It's a nice effect that helps tie the car back to its source. Likewise, these also come with a clear plastic display case and a "3D Lenticular" showing Batman standing in front of snow-covered alleyway. Both the Batsuit and the alley are faithfully done in the style from the book, and - if you look close enough - you can see the light from Christmas decorations shining through two windows in the background (this effect was used throughout the graphic novel to imply candles, similar to what you might have seen in Victorian London during the holidays).

Display cases will run you four or five bucks alone, and a similarly sized lenticular bookmark would run you two or three. I don't really care about the magazine, but having a ready-made display case complete with backdrop adds some real value.

These retail for about $20, though I was lucky enough to find one in a 50% off bin. Your best bet is to try your local comic shop, though you can probably find one on Ebay or Amazon, as well.
Erin Snyder Superhero Toy