Showing posts with the label Silent
Show all 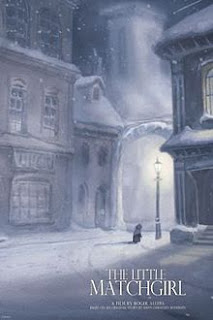 This Disney short was originally supposed to be part of a 2006 version of Fantasia that Disney abandoned. This segment was produced anyway, and we saw it as part of the Disney Short Film Collection. It's a surpisingly faithful adaptation of Hans Christian Anderson's short story of the same name, even incorporating the original visions of the Match Girl as she freezes to death in the cold. Good times, all around. The original story makes it clear that the events transpire on New Year's Eve, though the girl hallucinates a Christmas tree. This short seems to have shifted the story to Christmas itself, as evidenced by her watching a family climb into a sleigh with a handful of wrapped gifts. The story is relatively bare bones: a poor girl fails to sell matches. Ignored by the world around her, she retreats into an alley, where she lights her matches and sees beautiful visions in the fire. The last light to go out is her own, when her grandmother's spirit whisks her
1 comment
Read more

By Erin Snyder - November 26, 2010
I don't know how to classify this - technically, it's a movie.  In fact, it's one of the first movies ever made.  But it turns out that back in 1898, they didn't expect movies to have three-hour run times. This one, for instance, clocks in at a minute and change. There's no real story, per se.  The short film shows some kids getting tucked into bed, we see Santa show up (featuring some early special effects), he leaves some gifts, and he's on his way. It's interesting to see an early version of Santa, sporting an outfit - and waistline - more reminiscent of his origins as a bishop than his current incarnation as a Coke-drinking, cookie-scarfing, overweight elf. Some of the effects are also intriguing.  To simulate the lights being dimmed, they use a curtain that covers most of the set.  I find it fascinating to look at movies from when they were still incorporating stage techniques.  You get the sense that this was directed more like a puppet sh
Post a Comment
Read more
More posts