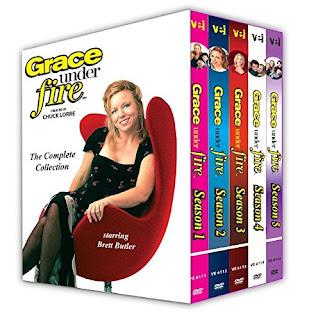 Grace Under Fire was a sitcom from the 90's, which already tells you a great deal about what you're getting into. This one was built around the comedy of Brett Butler, who stars in this as a divorced mother raising three kids in a Missouri.

Watching this, I was immediately overtaken by a sense of deja vu. I remember these actors and sets, despite having no memory of seeing an episode.

Keeping Faith (1993)
The A-plot in this episode concerns Grace's sister, Faith, who's hospitalized at the start. Grace and her friend, Russell, drive to the hospital in Alabama to meet her, which leads to a series of run-ins with people who remember Grace from high school, despite her having no recollection of any of them. This is easily the weakest part of the episode: while the recurring joke is occasionally funny, the over-the-top characterizations of the locals gets a bit too cute. When Faith enters the picture, things improve. The sisters bicker constantly, and the actresses play off each other brilliantly.

Eventually, Grace convinces Faith to come stay with her for the holidays. The rest of the episode meanders through a couple plot lines: Faith, it turns out, has been seeing a married man, something Grace doesn't approve of. Meanwhile, Grace's oldest son, Quentin, misses his father. There's a surprisingly touching resolution to this in the form of a brief conversation between Quentin and Grace. It's a simple yet emotionally believable scene, something rare in the episodes of this series I watched.

On top of all this, there's also a series of recurring gags around the neighbor's nativity scene being vandalized. A cheap joke, I'll warrant, but teenagers stealing the baby Jesus is always funny.


The Holidays (1994)
A couple plot lines compete for screen time here. First, Jean, Grace's ex-mother-in-law, is depressed about the holidays after Grace rebukes the dangerous and racist presents she initially picks out for the kids. This leads to a brief fight, which is resolved late in the episode with a cliche talk about feelings, an unnecessary apology, and a bunch of randomly thoughtful gifts.

Meanwhile, one of Grace's friends invites her to a Christmas dance, and she accepts. She's not romantically interested, and a bunch of minor characters express concern that he'll misinterpret it as a date. This is all negated by a brief conversation at the dance in which he makes it clear it would never work out between them.

There were a few decent jokes, but over all the writing felt forced and lifeless. This suffered from the same malady the dragged down a lot of 80's and 90's sitcoms: the punchlines are almost always preceded by a forced setup you can see coming a mile away.


Emmet, We Hardly Knew Ye (1995)
The surreal thing about jumping forward entire seasons like this is that you're unprepared for an episode where a major recurring character dies and their secret gay lover comes to their funeral.

In the cold opening, Jean gets a call informing her that her husband died of a heart attack. Pretty soon, Grace's ex shows up for the funeral, as does Emmet's aforementioned secret lover. Apparently, this is something Grace learned about in the preceding episode and had been keeping from Jean. At the funeral, Grace tries to keep Emmet's grieving lover from revealing the nature of his relationship. This was an extremely awkward sequence, in part because it wasn't clear the writers were on his side. To their credit, the studio audience applauded when he blurted out that loved Emmet.

The episode then shifted to being about Jean coming to terms with this revelation. There were some decent sequences here, though overall the episode was mostly just unpleasant. The death and revelation weren't treated with the sensitivity or seriousness they deserved: this one was mostly just a zany comedy with a few dramatic scenes tossed in.

The holiday elements were present, but - as evident from the synopsis - somewhat background in nature. I'm not sure whether the timing lined up or if they were trying to do the standard contrast between decoration and death, but it felt a little random.


A Holly Jolly Christmas (1996)
This episode revolves around Quentin, now recast with an older actor. He's been acting erratic, so Grace pulls some strings and gets him a job at Russell's pharmacy. She also reluctantly lets him move into the garage. For a while, it seems like everything's fine, but then she discovers a beer can and confronts her son.

Turns out, he hasn't been drinking: he's been smoking pot. Cue the dramatic music, I guess.

What follows is this show's attempt at a special episode. To be fair, they approach it from a relatable standpoint: Grace used drugs in her teenage years, so she's unsure how to proceed. A lot of parents were going through things like this back in the 90's - I remember that mine had no idea how to react when they discovered I had no interest in experimenting with the stuff.

Initially, she tries to play it cool, until she comes to the conclusion that not intervening could send him on the same road to ruin that set her back in life. She comes down hard on him, sets some rules, and he respects her tough but fair stance.

So much for realism and nuance.

Christmas is happening in the background. Jean makes "punch loaf," a fruitcake-like holiday treat everyone hates, Russell sends his father on a cruise, and Grace's ex shows up with a tree stolen from a park and with a dangerous gift for their daughter (neither of these ever develop into meaningful stories).


Mother Christmas (1997)
This one's mostly about Grace's mother showing up for Christmas and trying to mold her granddaughter into a proper lady. It's a bizarre situation, one better suited for the 1950's than the 90's, and Grace's tepid response is bewildering. Even more obnoxious is the episode's attempt to find a sort of compromise in the closing minutes, with the revelation that she's trying to give her granddaughter the opportunity Grace never had.

To be fair, it's implied that Grace's daughter isn't going to change, but the grandmother isn't really called out for this regressive bullshit.

The side plots include Russell sexually harassing his assistant (without consequences - come on: 1997 wasn't that long ago) and making his dad dress up as Santa Claus, and Grace's friend working on Christmas.


Conclusion
I've seen worse sitcoms. This had a good cast to work with, though lazy writing held it back. The first holiday episode was by far the best, though most of the others had some great moments. From what I saw, the show handled comedy better than drama, which wouldn't have been a problem if they hadn't tried tackling both. For the most part, whenever things headed in a dark direction, it fell apart due to cheap jokes and exaggerating characters.