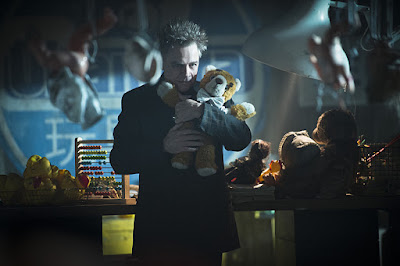 Watching Christmas episodes in context is a very different experience than tuning in for just a seasonal outing. Unlike most of what we review on this blog, The Flash is a show I watch religiously - it's a fantastic program that delivers classic superhero adventures on the small screen. If you're a comics fan and you're not watching, you owe it to yourself to get caught up. This is one of the best.

I talked about the first Flash Christmas episode last year. Like that one, this primarily exists because the show unfolds in real time, and Central City - like everywhere else - celebrates the holidays. That doesn't mean they didn't go all-out for Christmas, though: even for a series where a psychic gorilla has a recurring role, this one just pushed the limits in terms of genre tolerance.

When I say "genre tolerance," I'm talking about its willingness to incorporate tropes and tones from its source material. There are things you do in comics and animation that TV producers have shied away from for decades.

The episode starts with the season villain, Zoom, running down Harrison Wells (sort of last season's villain, but this one's from a different Earth... just go with it) and grabbing him by the throat. Wells tells him to kill him but to spare his daughter, and Zoom responds by putting him down safely and saying, "Merry Christmas," in his usual creepy voice. Cue the Flash title card with snow falling, then cut to decorations and holiday music.

I'm loving this already, and we haven't even gotten to Mark Hamill.

Next, there's a little family melodrama. Earlier this season, Iris West learned from her mother (who wasn't dead, like she'd thought her whole life) that she has a brother. She then kept this information from her father, because... uh... she thought it would kill him?

For what it's worth, this is about a tenth as dumb and melodramatic as the soap opera crap Arrow pulls on a weekly basis, and I love that show, too. At least The Flash resolved most of this by the end of this episode with minimal sap.

Everything is especially seasonal, as a snow storm has materialized in Central City. This, of course, puts everyone in the Christmas spirit. Unfortunately, the storm didn't appear on its own: it's the work of the Weather Wizard, who's using it for cover while he breaks Captain Cold and Trickster out of prison. He has a few motives for this: first, he owes Captain Cold a favor from season one. Second, he wants a team-up to kill Flash. Unbeknownst to him, Captain Cold has been warming up to Barry. He knows his real identity and has some respect for him. He refuses Weather Wizard's offer and warns Barry that they want him dead. However, he flatly refuses to help bring the villains down.

Complicating things, Barry's girlfriend has a grudge to settle with the Weather Wizard. Before getting his superpowers, he murdered her father. This inspired her to become a cop, and now she has a chance to take revenge.

But who the hell cares about any of that? The Trickster is loose, which means this episode is going to be extremely fun. The character, making his second appearance in this incarnation of The Flash, is played by Mark Hamill, who channels all the zany psychopathic charm he's developed from years playing the Joker (and before that, Trickster in the 90's Flash series).

Remember what I said about this breaking new ground? There's a sequence where Flash tracks Trickster to an abandoned toy factory only for the villain to remotely send hundreds of explosive dreidels after him. The sequence was simultaneously ridiculous and creepy; it could have been pulled right out of any one of a dozen episodes of Batman: The Animated Series.

He gets out of that without too much difficulty, but by the time he finds the villains, the Trickster's already dressed up as Santa Claus and distributed presents to a hundred kids. And the presents, of course, are actually bombs, meaning there are a hundred explosives hidden throughout the city. There's no way for Flash to find them in time, so he's forced to accept the Weather Wizard's terms: he allows them to finish him in exchange for not detonating.

Of course, the super-criminals want to play with him first. While Weather Wizard hammers Barry with hail and lightning, his friends devise a method of getting rid of the bombs safely. Does the explanation make sense? Not in the slightest. But, again, who cares?

As soon as he hears the bombs are gone, we get one of the show's best fights. Best in that it's over in a second or two, as Flash is able to neutralize his opponents before they can even process something's happening. It's somewhat unclear why every fight in this series isn't settled like this.

We're not quite done. Patty, Barry's girlfriend, shows up and almost murders the unconscious Weather Wizard, but Barry (as Flash) talks her down. Any cheesiness from this sequence is immediately forgiven when Trickster, having heard the whole thing while tied in Christmas lights, exclaims that the speech was beautiful and starts crying.

After this, everyone gets together at the Wests' for Christmas dinner. There's a knock on the door, and Wally West shows up. I can't wait to see him become Kid Flash (or Impulse).

Lastly, we get a little more time with Zoom and Wells, including a brief holiday reunion between Harrison and his daughter, Jesse Quick (also destined to become a speedster, assuming they follow the comics). This sequence just clarifies that Zoom's been sending supervillains to Flash's Earth in order to make him better, not to kill him. He wants to steal Barry's speed force, so the more he's acquired, the more Zoom can take. He's using Harrison's daughter as leverage to force him into helping, something Wells reluctantly agrees to.

We don't know who Zoom is under the mask. He might just be another version of Thawne, like in the comics, but my guess is they're going to go a different direction. I'm actually betting he'll be an alternate version of Barry Allen from Earth 2.

Despite getting a little corny at times, this was a fantastic episode; one of my favorites, largely thanks to Mark Hamill and the role the show runners were brave enough to put on TV. It's rare to see media outside of comics embrace the surrealism of superheroes and villains this completely, even though - for me, at least - that surrealism is a huge part of why the genre's appealing. I love seeing zany plans and over-the-top contraptions taken seriously as valid story elements.

The holidays permeate this episode on multiple levels. They're part of the setting as a backdrop of decorations, lights, and music. They're part of the plot, in the form of the Trickster's schemes. They're the subject of multiple jokes from most of the characters. And, thematically, the classic holiday trope of a family reunion emerges multiple times - Wally West's introduction, Wells briefly holding his daughter before Zoom whisked her away, and even Patty's memories of her father resurfacing are all, in their way, reunions.

If you like comics, The Flash should be high on your list of shows to track down (right after Daredevil and Jessica Jones, and just before Agents of S.H.I.E.L.D., Supergirl, and Arrow - it's a good time to be a geek). This episode is better in context, but if you're looking for a quick way to get a sense of what this show is like at its best, there aren't a lot of live-action superhero Christmas stories better than this episode.
Action Comedy Episode Erin Snyder Highly Recommended Superhero