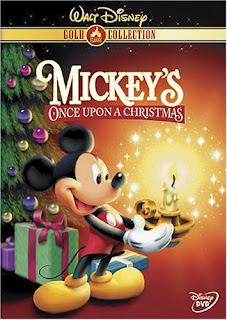 This direct-to-video special comes from a particular time in the history of the Disney company. When it came to anything starring classic Disney characters, they hadn't yet embraced a modern sense of humor or story, but had rejected any edge or depth inherent in the early cartoons.

This results in stories so bland they could be animated entirely in beige.

Of course, the animation is actually bright and crisp. It's the writing that's so painfully inoffensive as to end up nothing but drivel.

The first piece is a variation on the 'Christmas Every Day' story, which we've seen before in many forms. It features Huey, Dewey and Louie as the kids who wish for it to be Christmas everyday after they have a great holiday with Donald, Daisy, Scrooge and an over-emotional aunt character who I've never seen before. Unlike many times I've seen this story, the boys don't immediately start changing things. They seemed to live through several almost identical iterations of the day before getting frustrated and bored.

They finally decide to change things up by playing a series of mean pranks, aided by their knowledge of other character's actions. This results in a great deal of unhappiness and destruction. At this point, even though the story was pretty dull, it made sense for them to feel remorse and try to make up for their actions on the next iteration.

Of course, the writers couldn't assume that we'd understand that without some underlining, so they also took that lowest moment to have the boys read a corny card from Donald for the first time. The next day they use their knowledge of the repeating day to do favors and be kind to other characters. Donald is suspicious of the boys' good behavior, but they bring him around with a thoughtful gift, and the cycle is finally broken. Overall this was boring. The slapstick is dull when it isn’t distasteful, and even though I got a hint of sweetness around the resolution, it was all too obvious.

The second segment follows Goofy and Max. Max (Goofy’s son, for anyone who missed Goof Troop) is younger here than in anything else I’ve seen, and is questioning the existence of Santa. Goofy tries to support Max’s belief, and the writing is… odd. I’d bet money that there was a draft of this script that ended with the message that it didn’t matter if Santa exists or not, because what matters is the spirit of giving, and we can be Santa for each other.

But of course they don’t do that. They do come weirdly close, only to miss the mark. Goofy reassures Max that Santa will come through for him. Then Goofy and Max go to a neighbor whose family has fallen on hard times to share food and company, and Goofy comes in as Santa. Max buys it momentarily, only for his excitement to be dashed when the disguise is removed.

He sulks at home, and Goofy tries to get him to come up on the roof to watch for Santa. Some slapstick follows, and at one in the morning Goofy sees something on an adjacent roof and wakes Max. They’re both excited, until light reveals the shadow to be a burglar trying to rob Pete’s house. Goofy finally gives up on seeing Santa and goes in. Max is disturbed to see his father so downcast, and decides to dress as Santa to cheer him up. Goofy is excited and runs to ‘wake Max’, while Max tries to escape back up the chimney to preserve the illusion. They both end up on the roof again with everything revealed. This was a nice moment. Max and Goofy both had demonstrated that they understood the important thing was trying to make other people happy.

And then Santa came by and gave Max an expensive snowboard, thereby negating all the nuance and sweetness the story had built up. Never mind, I guess.

The last piece is Mickey and Minnie in a version of The Gift of the Magi. Mickey can’t make enough hawking Christmas trees for Pete to buy Minnie a nice gift, and Minnie’s Christmas bonus at the department store turns out to be a fruitcake. It’s all just fluff, we know this story.

Mickey trades his harmonica to buy Minnie a necklace to hang her heirloom watch on, and she trades the watch for a harmonica case. All the rest is running about and tiresome. It’s odd, though, because the necklace is still a nice gift without the watch, so I think they missed the boat a bit with the choices made for the adaptation.

A few odd notes: Minnie and Daisy work at the gift wrap counter, and there is a momentary animation callback to a much better Disney Christmas cartoon. Minnie owns Figaro (from Pinocchio), I suppose so that she can have a cat to balance the existence of Pluto.

The special wraps with all the characters singing a quick medley of carols.

This wasn’t offensive, it wasn’t badly animated or recorded, it was just badly written, like a committee had squeezed any true charm or humor out of each piece. You can catch this on Netflix, but I don’t really recommend it.
90's Comedy Lindsay Special