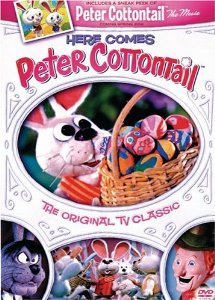 I'm pretty sure Here Comes Peter Cottontail represents Rankin-Bass's first attempt to push into a holiday other than Christmas. This largely forgotten artifact features Danny Kaye as the narrator (as well as a handful of other voices) and Casey Kasem as the title character, which means you'll spend most of the special expecting Peter to ask for a Scooby snack. No, that's not quite right: you'll probably spend most of the special looking for a ledge to jump off of. But you'll also notice that the main character has Shaggy's voice. The special, which is based on some book called "The Easter Bunny That Overslept," starts in the magical land of April Valley, which I'm assuming is a reference to Baum's "Laughing Valley." Either that, or it's just stupid. Regardless, all the Easter Bunnies live in April Valley, where they color eggs using paints brought to them by Seymour S. Sassafrass, who grows the plants to... you know what
Post a Comment
Read more
More posts