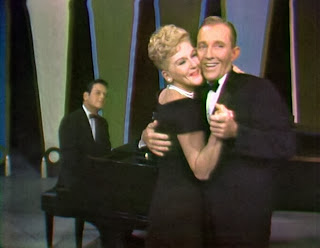 I laughed aloud very early on in this one, but it wasn’t at a joke. It was the announcer talking about the sponsor, Clairol: “The natural look, so appealing in a woman.” Different times.

This special, unlike the first, is in color. The DVD we had gives it a slightly fuzzy quality, but it’s definitely in color. I’m not sure anyone told the set designer, though. Most of the special takes place in a featureless gray void which is rather depressing.

There’s two credited co-stars for this special: Mary Martin and André Previn. Ms. Martin switches back and forth between charming and tedious, but Previn, a pianist and composer, is fairly amazing. Too bad he doesn’t get to do more here.

We open with a long, illogical sequence full of dancers in decent costumes doing mediocre choreography in front of that ugly gray void. Bing has a number I can’t recall, and then Mary Martin sings for far too long about nothing. Rea…
Post a Comment
Read more 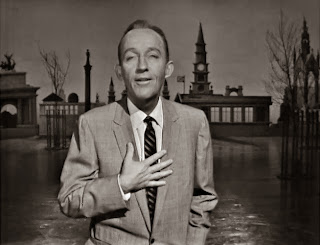 This is a very very weird TV special. A lot of it is just impenetrable references and stylistic choices that made sense in the context of the day… maybe. It’s in black-and-white, and the definition on the DVD we watched was really sharp. Almost too sharp, it often emphasized the weaknesses in the writing to be seeing the actors so clearly. It opens with a rousing song about judgement day, and then proceeds to ignore the fact that it’s supposed to be set at Christmas for the next hour.

It’s mostly about Crosby wandering around England in search of distant relatives, making thin excuses for cameos by British singers and actors. He looks sort of dazed or drunk, often glancing off-camera as if for a cue card. However, I think this is generally just part of his shtick.

We start up the main sequence with a long sequence in a tea shop, with a selection of songs and lazy choreography. Some of the jokes are almost c…
Post a Comment
Read more 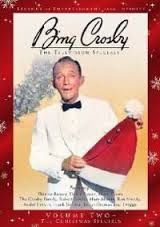 This is a collection of four of Bing Crosby's Christmas specials. I'm not going to go into detail about the individual content of each episode here - we'll do that in separate reviews. Instead, I wanted to talk a little about the experience of watching this as a whole.

I'd expected the experience to be tedious, which I suppose it was at times. Not what I want to discuss right now, though. It was also occasionally funny, interesting bizarre....
Not the subject, either.
What I want to talk about is a narrative that you can't help but notice watching this thing. The specials on this collection were from 1961 to 1977; that means he was nearing 60 when the first of these aired. His days as a major movie star were behind him, and his fans were aging. I'm sure a lot of the guests in his first special were famous at the time, but damned if I've heard of many.
Crosby almost always has a sort of laid-back style to his acting and singing, as if he knows it doesn'…
Post a Comment
Read more

The Blackest Night of the Year 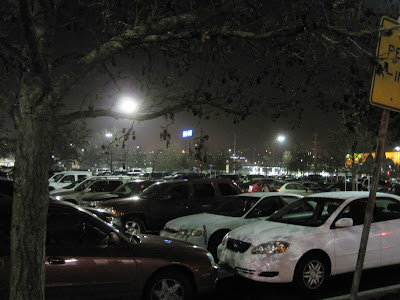 We started Black Friday late this year - about 9:30 PM on Thursday night (better known as Black Friday's Eve). Of course, Black Friday now begins at 12AM sharp the day before, thanks to benevolent retailer Walmart's decision to forgo closing at all.

Technically, shouldn't that read "Shop while you shop"?
By the time we arrived, things were relatively calm: no lines to get into the store, no pushing, only a moderate amount of shouting. The line to reach the checkout was of course absurd, but we weren't there to shop, anyway.

We were there to be around friends and family. Other peoples' friends and family, perhaps, but every one of the shoppers present had opted to be there instead of spending this time with loved ones, so - in a way - doesn't that connect us all in a deep and meaningful way?

I'm guessing that they were going to go with Comic Sans, but were worried people would accuse them of being elitist.
We were surprised to see a large number o…
Post a Comment
Read more 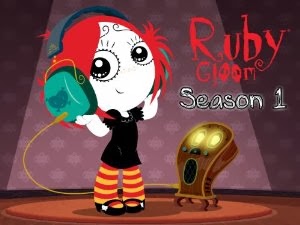 Man, when December rolls around, it’s hard out there for a kids’ show not set on Earth. You want to have a holiday episode, of course you do, but if it’s totally unbelieveable for your characters to celebrate Christmas (or Hanukkah, etc.) what do you, the writer do?

You could shoehorn Christmas in there anyway (See: He-Man and She-Ra) and you might get some camp value out of that, but even most kids’ll see the excuse for what it is.

Or you could make up your own original holiday that just so happens to resemble the winter-gift-giving-season we all know so well.

Ruby Gloom takes place in an undefined Halloween-esque dimension, with a bunch of supernatural characters who are also kids. It’s not at all scary, just a little gothic in its aesthetic. One of the kids is a cyclops, one a skeleton, one friend is a talking raven and one a bat, etc.…
Post a Comment
Read more 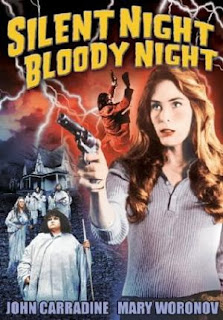 Silent Night, Bloody Night (not to be confused with Silent Night, Deadly Night, which I still have to get around to) is a cheaply made horror movie revolving around an abandoned mansion in Massachusetts. If I cared one bit about spoiling this thing, I wouldn't tell you that the mansion used to be an asylum, a fact which only comes out in a flashback making up the majority of the movie's last act, nor would I let it slip that the asylum's supposedly dead owner is actually less dead than everyone supposes. But if didn't reveal all that, this review would be absurdly short, so you see my dilemma.

Before they reveal the mansion or town's dark history, we're treated to a Psycho-style bait-and-switch. A big city lawyer comes to town with his mistress (the movie makes a point of having him call home at one point, in case we didn't know he was married) to offer some of the locals a chance to buy th…
Post a Comment
Read more 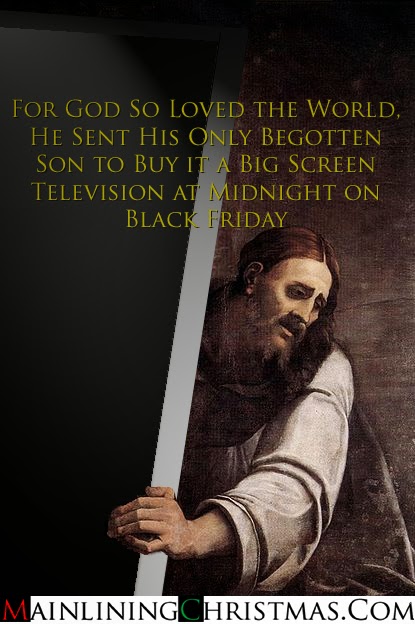 From all of us here at Mainlining Christmas, we'd like to wish you and your loved ones a Happy Black Friday. Remember who makes the season possible while you're macing a crowd of strangers tomorrow.
Post a Comment
Read more 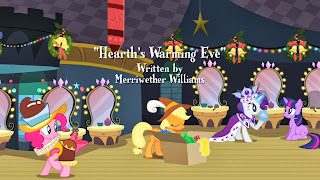 YAY PONIES! This is an unusual sort of Christmas episode. Since Equestria has no relation to Earth, their midwinter festival is a bit different. It’s a holiday in honor of the founding of their land, and the friendship between the different sub-types of ponies. It’s clearly a Christmas-type holiday, though, complete with garlands, ribbons, bells, and a story from long-ago.

The main plot is that the characters are starring in a holiday pageant in Canterlot which dramatizes the story of the founding of Equestria. Most of the episode is this story-within-a-story, dramatizing the legend of the original leaders of the Unicorn, Pegasus and Earth clans. It’s about how their differences nearly destroy Equestria before it starts, but then their friendship saves the day. The warmth of their friendship drives away windigos, evil ice-creatures that feed on hatred and come close to starving all the ponies in an endless winter.

I kind of love that under the ‘friendship’ story, it’s a classic winte…
Post a Comment
Read more

I type those words, but they're misleading: none of us ever really left. How could we, with the Christmas season slowly stretching towards eternity? No, we've been here all along, keeping the yule log burning, the eggnog pouring, and the DVD player humming.

But, still, we've crossed a threshold. Black Friday's Eve is upon us once more, with turkey, mashed potatoes, throngs of screaming shoppers trampling each other to death, and cranberry sauce. A lot of people don't like cranberry sauce, but I've always been a fan of the stuff.

This year brings us something special. Well, really, it brings more of the same. But when the same refers to endless Christmas specials and a never-ending supply of holiday music, well... that's pretty special in its own right, isn't it?

You may be wondering what we still have left to watch after three years of this blog. If so, you're a poor, misguided fool with no conception of the depth this holiday offers. …
Post a Comment
Read more 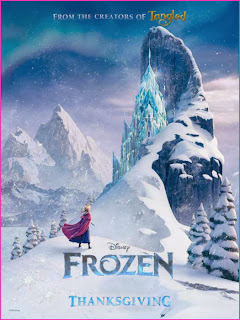 Cards on the table here: Lindsay and I don't agree on whether this even qualifies for the blog. She thinks it's not a Christmas movie because it technically takes place in the summer, has nothing to do with Christmas, and never once mentions the holidays by name. And those are valid points.

But here's where I'm coming from: I'm looking at a movie with five main characters where one's a talking snowman and another is a reindeer. A full 40% of the leads are Christmas tropes.

"Are there bells?" you may ask. Yes - hanging ice bells that the reindeer gets tangled in.

"But does the reindeer appear to fly?" you'll respond. There is a scene where the reindeer leaps over a ravine that's reminiscent of flight.

Let's add this all up:

If I'm doing the calculations right, that still comes out to 2.71 megayules, which is well above the cutoff for …
Post a Comment
Read more
More posts