By Erin Snyder - April 20, 2013
For several years, Community has been regarded as one of the best things on TV. I've been addicted since I checked out the first few holiday episodes. The most recent (and almost certainly the last) season of Community has been rocky. The show's creator, Dan Harmon, was fired last year, and a number of writers and directors left in solidarity. The network brought in some new writers to run the show. Overall, they've done a better job than most people expected, but they're certainly no substitutes for Harmon. "Intro to Knots" should have aired in December, but the entire series got pushed back and it aired last Thursday. This episode was less driven by a gimmick than the last two Christmas episodes: no songs or animation. It was, according to Wikipedia, intended as an homage to "Rope," one of Alfred Hitchcock's movies. Well... I've never seen that. But I certainly recognized elements from other sources. The plot revolved around the study g
Post a Comment
Read more 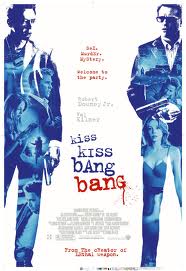 "Chapter Two: The Lady in the Lake." "Chapter Three: The Little Sister."  If you're already intrigued, then you'll probably like this movie the way I do. If you're here, you probably realize that Erin and I are rather fond of Christmas, or at least Christmassy things. You've probably picked up that we both enjoy fantasy and science fiction. You may not know that I'm also a huge fan of noir. So a noir-themed dark comedy set at Christmas? Yes, please! Kiss Kiss Bang Bang has a fairly amusing pedigree. It's known as the movie that restarted Robert Downey Jr's career. It's one of Shane Black's films, so like several others, it takes place at Christmas. The title comes from European slang description for James Bond movies. And as alluded to above, all the chapter titles within the movie come from Raymond Chandler. It’s either a noir-style mystery-thriller that is also really funny, or the kind of loving parody that fully embrac
Post a Comment
Read more
More posts