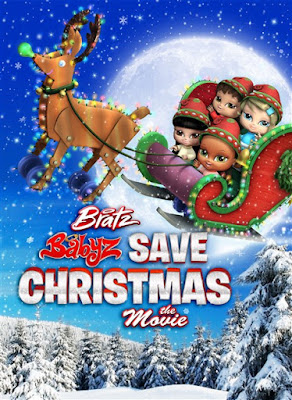 I mean, we expected awful. It's called "Bratz Babyz Save Christmas," and it's a sequel to a direct-to-video movie based on a toy line spun off of another toy line that was essentially a knock-off of Barbie: this was never going to be brilliant film making. But we weren't ready. I'm not sure anyone could have been ready. I'm going to do my best to prepare you, in case you're foolish enough to try and watch this yourself, but the task of trying to depict in words the experience we just endured is a daunting one. This thing, on all levels, in all ways... it was awful.

Based on the four minutes I was willing to invest researching this, it seems to be the third movie in the CG Bratz Babyz direct-to-the-dumpster-behind-Best-Buy-because-no-one-was-actually-stupid-enough-to-buy-the-video series. Did I mention it was awful?

It was. Let's start with the animation. You know how crappy attempts to create CG humans result in a doll-like quality often called the uncanny valley? Imagine a far crappier attempt to create living dolls. Imagine something that aims for the uncanny valley but falls far short of that mark: computer-generated dolls with empty, soulless eyes. The stuff of nightmare. What you're imagining right now - way better than this. This was just awful.

The movie opens the day before Christmas. The Bratz Babyz are staying with their grandmother while they wait for their parents to get back from a snowboarding trip. Also a significant plot point: there's an electric reindeer and sleigh in front of the house. Just as the girls are discussing how much they're looking forward to seeing their parents, their Gran (they always call her that) gets a call saying the flight's been cancelled. The kids are sad, so Gran takes them to the mall to meet Santa. While there, they meet a boy living at the Summerhouse orphanage who wants nothing more than what's essentially a Power Wheels car. The Bratz Babyz resolve to find Santa and let him know. This was about ten minutes in, and we could already tell it was awful.

Meanwhile, three criminals, having screwed up an armored car robbery, are at the same mall. One's dressed as Santa, and the other are elves. They pick a few pockets but don't really get any money. Their leader - the one dressed as Santa - gets a call from his boss. He's told to get a hundred thousand to his boss immediately or face the consequences. The Bratz Babyz - yes, I'm going to keep calling them that - overhear a small part of the conversation but misinterpret it as meaning he's the real Santa, and he'll have to cancel Christmas due to lack of help. They don't manage to catch up with him and head home, more depressed than ever. The only ones more depressed were Lindsay and I, because this was barely getting started. The realization was awful.

The Bratz Babyz see a news report on television where one of Santa's elves is interviewed about Summerhouse - the very same orphanage as the one the boy they met was from. It turns out Santa is planning to deliver that Power Wheels with the trunk holding a million dollars donated by "an anonymous hip hop recording star who grew up an orphan himself at Summerhouse." Yes - the writing is actually that awful.

Because they think Santa is cancelling Christmas due to a lack of elf helpers, the Bratz Babyz hatch a plan to go to the North Pole and assist. To get there, they take Gran's electric reindeer sleigh. The robbers, who saw the same news report, plan to drive there and steal the aforementioned million dollars. And they're trailed by a mysterious woman pretending to be mall security. All of them, let me say this again, are planning to drive to the North Pole. AWFUL.

But not as awful as the sequence where they do it. This was fifteen of the most grueling minutes I'm trudged through in the time I've been writing this blog. I'm not sure how to convey just how tedious this section was. I lost count of the number of zany gags with the thieves as it was established only the one dressed as Santa was really bad (the other two were just astonishingly stupid). And the woman was followed by a cop - she stole his car at one point and left him handcuffed at the side of the road (I promise, it wasn't a millionth as entertaining as the least interesting version of that scene you could possibly be imagining). Oh, and Gran got stuck in a chimney, because... because.... Who the hell cares why she got stuck in a chimney? Just take my word for it: the reason was idiotic, made no narrative sense, and the experience of watching it play out slowly in several chunks was absolutely awful.

At some point, the Southern California backdrop of palm trees and sand gets replaced with snow, and they arrive at what everyone initially refers to as the North Pole. The thieves get here first and bumble around in hiding until the Bratz Babyz show up, at which point the fake Santa thief sends his two goons out to distract them or something. The goons and girls both tell the elf working there that they want to become elves and help Santa, so he gives them a bunch of tests to see if they're qualified, which all of them are. This section, like all before and all after, was awful.

Eventually, the other thief gets the key to the Power Wheels from the elf. Before he can make his getaway, the woman who'd been trailing him from the mall shows up. Turns out, she's the "boss" they've been afraid of. She takes over, they lock the Bratz Babyz and the elf in the stables with the reindeer, and they take off. While in the stables, it's established this isn't the real North Pole but rather - actually, I don't think they ever stated what this place actually is. Maybe a Santa-land amusement park or something? Despite this, the elf insists he's real, and Santa sends him here to find and test potential elves. Also, he insists the reindeer are really Santa's. This scene was so awful, it drags down every moment you've spent alive, and forces you to realize your entire life has now been - on average - awful.

The two goons feel awful, because they really wanted to be elves, but they're initially scared of their boss. Then, about thirty seconds later, they realize they made a mistake, jump off the back of the Power Wheels, and unlock the stables. The elf stays behind while the Bratz Babyz and goons take the reindeer after the criminals, who are driving away in the Power Wheels toy car, because everything in this Universe, as well as all parallel Universes, alternate dimensions, and the deep void that exists in the well between all worlds, is awful.

The Bratz Babyz catch up to the thieves, largely thanks to the revelation those reindeer do, in fact fly. Then one of the Bratz Babyz uses a yo-yo to force the toy car off the road and tie up the boss. The police arrive randomly, arrest the two bad guys, then let the reformed goons go on the word of the elf. The Bratz Babyz get a ride home, their parents leave a message saying they'll be there in the morning, then Santa shows up to presumably help Gran out of the chimney. The whole thing ends without a proper resolution, which I'm not complaining about - I'll take any amount of time I can get away from watching something this awful.

This isn't the kind of movie you watch: it's the kind you endure. Actually, if you're anyone but us, I suspect it's the kind you leave two minutes in. And, despite our commitment to the holidays, don't think we weren't tempted. Because I need to apologize right now. I've been referring to this as awful almost constantly since starting this, and I now see how unfair that is to all the awful things in this world. Horrible, disgusting things that deserve better than to be compared to this. Because this was beyond awful.
00's CG Comedy Crime Against Humanity Erin Snyder Fantasy Musical