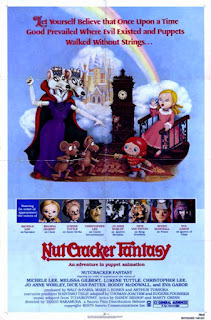 Before I start, I want to take a moment and discuss what I find utterly incomprehensible - it is likely not what you think it is. For example, as strange as it is that Sanrio, the Japanese company best known for Hello Kitty, produced a 1979 stop-motion fantasy movie re-imagining the Nutcracker as a dark fantasy in the vein of Oz and Wonderland, it's not incomprehensible. What my rational mind cannot accept is the idea that this was made, shown in America with an audio track starring Christopher Lee as Drosselmeyer, and then was inexplicably forgotten. Why isn't this at least as well knows as Rudolph's Shiny New Year? It's ten times as batshit crazy.

The plot stays relatively close to the original story; closer, in some respects, than Tchaikovsky. That said, there are some major deviations. For example, neither E.T.A. Hoffmann's Nutcracker or Tchaikovsky's involved time-travel. However, it's worth noting the addition actually cleans up the narrative a bit.

But I'm getting ahead of myself. Nutcracker Fantasy begins with the Ragman. The Ragman is a Krampus-like figure who finds children awake past their bedtimes, transforms them into mice, then stuffs them into his sack.

The intro to Nutcracker Fantasy is devoted to him, and he's discussed heavily during the first five minutes. After that, aside from an unexplained appearance while Clara's travelling backwards through time by climbing through a clock, he never comes up again.

Again, I'm getting ahead of myself. 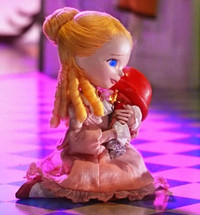 The main character, Clara, is staying with her aunt and uncle. Uncle Drosselmeyer fixes clocks and makes dolls, though he ominously proclaims that his dolls are never perfect inside and out. Clara falls in love with his Nutcracker doll, however, and insists it is perfect. Originally, Drosselmeyer is reluctant to leave the doll with her, but his wife forces him to do so. We quickly learn why he didn't want to leave her the doll when a swarm of mice steal it from her.

She chases them downstairs, where she confronts the two-headed rat queen, Morphia, and fights to keep her from taking the nutcracker, who comes to life to protect her. She loses the nutcracker, wakes up in bed with a fever, then has another dream where she crawls through a grandfather clock into the kingdom of dolls, which is at war with the aforementioned rat queen.

Only she probably went back in time, since the nutcracker isn't a nutcracker yet: he's the captain of the king's guard, and he's trying to transform the princess, who looks identical to Clara, back to her original form. Aside from Clara's presence, this section is grounded in the original: it's essentially the backstory for how the nutcracker became a toy.

The king has assembled a committee of "wise men" from all over the world for help breaking the rat queen's curse, but all they manage to do is engage in culturally insensitive behavior for five or ten minutes. Clara then takes it on herself to track down a gypsy woman named The Queen of Time, who helps her discover the secret to undoing the rat queen's spell.

There is a way. You must destroy the "Nut of Darkness" (and, no, I am not making this up), which is also Morphia's heart. There is only one weapon in the kingdom capable of such a feat: the Sword of Pearl. Naturally, the Queen of Time entrusts this magical blade to Clara, who passes it off to the captain of the guard.

There's a war, and many die on both sides. Keep in mind that, while they didn't outright state the enemy mice are kidnapped children captured by the Ragman, it's heavily implied. Just something to keep in mind when the toy soldiers are gunning them down.

The hero gallantly kills the rat queen, but she curses him with her dying breath, transforming him into a nutcracker. Again - this is basically the story. Despite the fact he saved the princess, no one in the kingdom wants anything to do with him now that he's a toy. Clara, however, still loves him and goes on a quest to find a way to save him.

It's around here that they fit in a dream sequence where she goes to a kingdom of sweets and sees a bunch of pieces of candy dance. Also, Hello Kitty gets a bizarre cameo. At any rate, the rat queen's son survived and tracks her through the woods. He tries to kill the nutcracker, but Clara jumps in front. The sacrifice breaks the curse, and she wakes up in bed. Of course, a real-life version of the captain shows up, and they live happily-ever-after.

The story is an absolutely insane jumble of Hoffmann, Tchaikovsky, generic fantasy, and stop-motion Christmas tropes. Tchaikovsky's music is woven in throughout, but it's rarely used for long stretches, save for a couple ballet sequences which bizarrely morph into live-action dancers.

The holiday elements are somewhat muted, overall. There's no mention of Christmas; the connection is limited to the source material and the style, which was clearly meant to emulate Rankin/Bass specials. In that respect, it absolutely succeeds. Visually, this is at least as beautiful as anything they ever produced. Also, as I said before, it's even more trippy.

The story line, obviously, makes very little sense and contains massive plot holes and loose ends. The Ragman is dangled as the centerpiece of the story then abruptly dropped. Likewise, the encounter at the beginning doesn't fit in the timeline (assuming Clara literally went back in time, the rat queen should have been dead at that start of the movie). Of course, you can hand wave all of this by interpreting the whole thing as a dream, but that has a whole host of other logic problems. 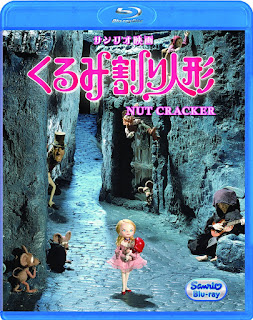 But who the hell watches something like this for a coherent story? It's a Wonderland/Oz mashup with a warped Nutcracker veneer: that alone forgives a thousand plot holes. It's got boring bits and bad writing choices, but - frankly - it's just so unique and fascinating I have to recommend it.

If you want to see this in decent quality, good luck. Nutcracker Fantasy was only released in the US on VHS, and the only full version we could get our hands on was a digitized version of the videotape we found on Youtube. It was good enough to follow the story, but the quality left a lot to be desired. You can get a better idea of what it's like searching for clips of the Japanese version online. They just released a remastered version there: hopefully they'll send it over here soon.
Erin Snyder Fantasy Highly Recommended Movie Stop Motion