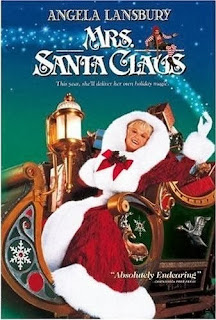 Here's a quick quiz for you:

How do you feel about:
Old-School Movie Musicals?
A: Love 'em B: Like some C: Meh

Broadway Musicals?
A: Love 'em B: Like some C: Meh

Feminist Themes?
A: All kinds, all the time, it's even okay if they're slightly awkwardly handled
B: Passing the Bechdel Test is good
C: Only when impeccably researched/in documentaries

Angela Lansbury?
A: Goddess of theater and film
B: She's pretty great
C: I only like her most of the time

Give yourself two points for every A, one for every B, an extra four points if you have a daughter younger than 12 who would answer A on two or more of the questions, and an extra point for every one of these names you recognize: Jerry Herman, Bob Mackie, Rob Marshall, Mark Saltzman.

The film stars Lansbury as the titular Mrs. Claus. She likes her work, but is fed up with her stay-at-home life and her busy husband, so she takes the reindeer and sleigh on a trip to test a new idea she has about navigation. Unfortunately, they run into rough weather, and crash land in New York City.

With an injured reindeer, Mrs. C needs a temporary home. Did I mention the movie is set in 1910? She takes a room in a boarding house and immediately befriends the local immigrant families, including a young girl, with whom she strikes against child labor, and a young woman, with whom she marches for women's suffrage. It's a very busy week.

Now, there is a LOT of singing in this movie, and the occasional spontaneous choreographed dance number. Most of the songs I found at least decent, and some are quite enjoyable. However, most are plagued by an excess of reprises. It’s as though we'll forget it's a musical if they go more than sixty seconds without singing or that we’ll forget the previous song without several extended moments that call back to it.

Some of the reprises work, there are just too many of them. I did like the way the early solo in which Mrs. C expresses her frustration with her life was repurposed later as the march song.

There are also some awkward appearing and disappearing accents in the cast, particularly among the child actors. Some of the ethnicities represented seemed uneven as well in consistency or accuracy, although I think the writer's and actors’ hearts were in the right place.

While Mrs. C is off discovering the modern world and helping her new friends, Santa sits at home and worries about her. His elves are unable to cheer him up. These were really funny sequences, but I especially liked how much it seemed that Nicholas and Anna (you finally get her name at the end) really do have a loving, respectful relationship, they just needed a little time apart to rediscover it. Not bad for a several-hundred-year marriage. I was grinning all through the closing number.

We received a tip about this movie late last year, but weren't able to track it down at the time. This year it appeared on Hulu.
90's Comedy Fantasy Lindsay Movie Musical