Keeping Up with the Kardashians: Christmas Special (2013) 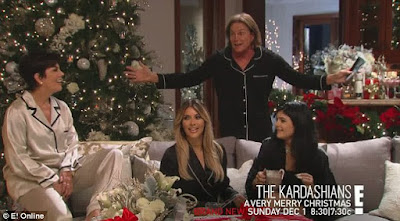 I'm still a little unclear what we just sat through. I understood the basics, of course. It was an episode of a reality show about a wealthy family who somehow managed to catapult themselves into cultural relevancy without offering anything of real value - no art, no philanthropy, nothing but a series detailing their attempts to stay in the public eye. But I don't understand why it was put on television, or why anyone turned it on.

Was it some kind of a freak show? The editing seemed to portray the Kardashians that way, though it's difficult to make that assessment after just one episode (and I have no intention of ever sitting through another). It was an hour and five minutes, and that's without commercials - God, how I longed for the sweet respite of a merciful commercial break. Every time the streaming paused to buffer was a gift. A GIFT.

Are they really as vapid as they seemed, or were they simply acting like dimwitted socialites for the camera? I have no idea. It seems as absurd to me that a family would willingly present themselves like spoiled, superficial morons as it does to imagine people able to retain this sort of media attention while being so idiotic.

Answers will not be found here. Let's move on to the plot.

I'm kidding, of course. There was no plot, only a subject. And, as always, the subject of the episode we sat through was Christmas. The special was essentially split in half. The first part focused on them participating in a white elephant gift exchange, while the second half was concerned with a photo shoot for a family Christmas portrait.

The stars, as they appeared (again, I can only speculate on whether they are really this dense) had a difficult time with the concept of a gift exchange. Once they understood the rules, it became even more bizarre. When they weren't looking bored, they scrambled for the various gifts or tried to hold onto the one they'd gotten. For the most part, these weren't especially luxurious items: any of them could have purchased everyone of the gifts they pretended to squabble over without thinking twice about it. When one seemingly won $10,000 on a lottery ticket obtained through the exchange only to discover it was a practical joke, she seemed to be emotionally invested. I suppose that's evidence this was fake. I doubt $10,000 would have paid for her outfit.

Between Kardashians opening gifts, the video cut to home movies of Christmases from their youth. They tried to sell this as sentimental, but I can't imagine anyone watching them open extravagant gifts in their expensive house and feel a connection. The Kardashians certainly didn't: they seemed more interested in adjusting their hair than what was happening on the videos.

All of this soon transitioned to the photo shoot. As grueling as the pace had been up to this point, it became far worse after. Their photographer wanted to shoot just the women, though Bruce (Bruce at the time of filming, now Caitlyn) objected after an absurd amount of melodrama with various family members making statements for and against the idea.

There was even more debate around one of the Kardashians including her young children in the shoot, which was built in a potentially dangerous set. Her lack of concern at the photographer's warnings was chilling.

The photographer's idea was to dress the Kardashians in over-the-top fancy costumes and photograph them in a sort of crumbling set featuring their images all around. It almost looked like a war-torn wasteland where they remained some kind of nobility, too ignorant to see the reality around them. I was reminded of the residents of the Capitol in The Hunger Games, and I'd be shocked if the photographer wasn't going for something similar to that.

But, as always, the Kardashians seemed completely oblivious to the context. It was bizarre and artistic, but the idea there could be a message or meaning beneath it never came up. I'm still unsure whether this really escaped their notice, or if it was all manufactured to give that appearance, to offer the audience the satisfaction of thinking they're mentally superior to this wealthy family who were actually in on the joke.

Is either interpretation any better than the other?

Regardless, the special contained no energy, no engaging emotion, and no drama that seemed remotely relatable. It was painful to sit through, and none of the stars came across as likable. Maybe the parents could have - they at least seemed to have a reality - but they weren't given anywhere near enough time. The stars, clearly, were the Kardashian sisters, and they came across as dull and cloying.

I don't think I need to type the words, but I'll do so anyway. At all costs, stay away from this. It's absolutely abysmal.