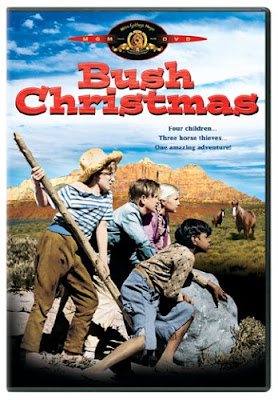 Bush Christmas is an 1947 kid's adventure set in Australia. The movie's filmed on location, which is the most positive thing I have to say about the production.

I understand where the movie's set, but I'm a little unclear on when. This opens with school wrapping for Christmas break, and the children immediately grab their horses for the ride home. I really can't say for certain that there weren't areas in rural Australia where kids used horses to commute to and from school in 1947, but it seems a little antiquated. My assumption is that this was supposed to be set in the past. Maybe early 1930's? The clothes look fairly modern, and there were a few cars, so it couldn't have been much earlier than that.

Instead of going directly home like good children, a few of them go for a ride. On the way, they run into a pair of horse thieves. The kids, mistaking them for something else, accidentally mention their father owns a valuable mare. The robbers send them on their way, asking that they don't mention their meeting. The next day, the mare's been stolen.

The kids tell their parents they're going camping but instead go after the thieves. For some reason, they have better luck than the police and locate their camp. They sneak down at night and steal back their horses, along with the thieves' boots and food. What follows is best described as a 1940's version of Home Alone, as the kids follow the outlaws and torment them, all while leaving a trail for the police.

This is nowhere near as interesting or entertaining as it sounds. So, yeah - just like Home Alone.

Eventually, the thieves turn the tables by leading the kids into an abandoned town. Until then, they'd assumed the kids were a group of aborigines they'd stolen from. When they corner the kids, they lock them in a small room which holds them for about a minute and a half. Just before the thieves take off with the recovered horses, the police ride in and arrest them.

That's it for plot. Let's see - what haven't we talked about? Of course, how could I forget? THE RACISM.

One of the kids is an aborigine, and his speech patterns are about on par with the way Native Americans were portrayed in Hollywood movies of the era. To be fair, he wasn't exactly portrayed as stupid: if anything, his knowledge was what kept them all alive. But he was definitely presented as uncivilized compared to the white kids. Also, there was an extremely uncomfortable sequence where the kids all smeared charcoal on their faces to be less conspicuous at night, and the others laughed because when he tried it he looked exactly the same.

The one female kid was the oldest, and the movie did a decent job with her. She was more or less the leader and was generally competent. I suppose they should be commended for that.

The movie had some serious sound issues. The entire thing was obviously dubbed - I'm assuming because it was filmed on location. This was distracting with the dialogue, though that was the least of the problems. The foley on this thing was astonishingly bad. So bad, in fact, that I'm bothering to write about it. I'm pretty sure they were trying to pass squeaking doors off as horse sounds.

But the real issue with this is the most common problem with bad Christmas movies - it was boring. Extremely, excruciatingly boring. Even if I'd cared about the characters (which would have been easier if they'd been smarter and less sadistic), I'd have been lost waiting for something to happen.

I am a little curious whether this in any way inspired Home Alone - there was definitely some overlap in premise, the thieves, and what the kids did to them.

Regardless, I don't recommend tracking this down. It'd be painful to sit through even without the racism.
40's Adventure Comedy Erin Snyder Movie Sucks