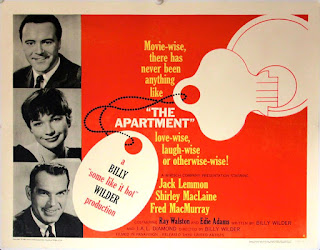 What an unexpectedly bizarre and brilliant movie.

We found this on some list of holiday movies or another and added it to our Netflix queue. By the time it reached us, we couldn't remember whether we'd added it because it was supposed to be good or bad - just that it showed up and was 55 years old. It actually feels a little older thanks to a decision to shoot in black and white, something of an anachronism at the time. We popped it in the DVD player, having no idea what we were about to see.

And, for more than half of the movie, we still didn't know. It was interesting from the start, though its tone was so unusual and its subject matter so precarious, we weren't sure whether to expect the best or the worst. Tonally, it walked a line between comedy and drama - I honestly wasn't sure whether it was heading towards a happy ending or a tragedy.

The premise, put simply, is that C.C. Baxter, a single office worker, loans out his apartment to his married superiors, who use it primarily as a place they can bring girlfriends. Baxter does this both to get ahead - they cajole him with promises of promotion - and out of fear of reprisal if he starts turning them down.

When Sheldrake, a successful executive, hears about this arrangement, he wants in. Unbeknownst to Baxter, Sheldrake wants to rekindle an affair with Fran, an elevator operator who Baxter has a crush on. Sheldrake lies to her, promising to leave his wife, and convinces her to take him back. He also finally delivers that promotion to Baxter, who's life finally seems to be heading in the right direction. Only he's of course no happier than before.

You can probably see why we were apprehensive about the direction this would ultimately head in. Gender roles and assumptions have changed a great deal since 1960, so it seemed likely the movie would shame Fran's character. But that's not what happened.

Forty-five minutes in, the movie jumps forward to an office Christmas party, and the plot kicks into gear. Baxter returns to his apartment to discover Fran comatose in his bed. After discovering she's only one in a long series of affairs, she tried to take her own life. With the help of his neighbors, Baxter's able to save her life and keep the suicide attempt quiet. He spends Christmas nursing Fran back to health.

We soon learn that years earlier, Baxter tried to take his life out of depression linked to unrequited love. It was irrational, but neither of the characters are portrayed negatively. Instead, the movie seemingly targets Sheldrake, who seems to lack any concept of others' feelings or needs. To him, Fran is being idiotic and emotional. Likewise, when Baxter finally has enough and quits, he dismisses his subordinate as ungrateful and acting out of spite.

By the time Fran is running across town in a sequence that would be cliche if the gender roles hadn't been skillfully flipped, it's become clear that the movie has no interest in moralizing regarding "the other woman" or men who work too hard to try and make it. Honestly, it's not even really about Sheldrake: he's no more the antagonist than the lesser managers who exploited Baxter and lied to their wives.

The villain in this 1960 movie is a cultural patriarchal system which devalues women and transforms men into sad, heartless monsters. Baxter and Fran are victims of this system, and only escape by rising above it. This is a shockingly modern theme and approach, and does a better job than the vast majority of movies being made more than fifty years later. It challenges gender roles and norms, giving its two leads both roles and traits associated with the opposite sex. These aren't their flaws - Baxter's compassion and Fran's strength are their salvation.

The holiday elements are used heavily. Like I said before, Christmas shows up a little more than a third of the way through. The remainder of the film occurs between Christmas Eve and New Years. Plot wise, the holidays serve as a catalyst: for example, the holiday party loosens inhibitions and people reveal secrets that set events into motion, and the isolation of the holiday is partly responsible for driving both Baxter and Fran to act recklessly. More than that, the tonal juxtaposition between the bright holidays and the underlying cultural sickness, as well as depression and self-loathing, give the themes added weight. The obvious symbolism of New Years, on the other hand, allows the movie to end on a hopeful note without giving into sentiment or betraying its characters.

This is a great Christmas movie. It's a classic that, perhaps due to its premise, never caught on the way a lot of others did. I'm barely scratching the surface of this thing - in addition to gender, it plays masterfully with film conventions, with capitalist ideology, and with the line between comedy and drama. It's a smart, fascinating film that's both hilarious and shocking.
60's Comedy Dark Comedy Drama Erin Snyder Highly Recommended Movie