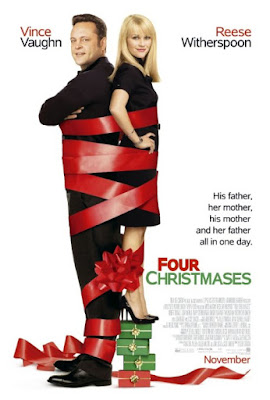 This is the tragic story of a couple, leading happy if unexamined lives, who get sucked back into the drama of their dysfunctional families and thereby are re-indoctrinated into old-fashioned scripts for what adults should want out of life. They make irrevocable choices based on the trauma of this experience that they will surely regret. Conveying the soul-crushing pain of acquiescing to their broken families' value systems is truly a masterful performance by both leads, and...

Oh, someone is telling me this was supposed to be funny. Well, that's just sad.

In seriousness, Four Christmases is a boring holiday rom-com that was dated when it came out. Now it's just painful, all the more so because it doesn't just suck. There could have been an interesting movie here, but it's full of missed opportunities: both narrative opportunities for the audience and health/self-care opportunities for the characters. In that spirit, I'm going to sneak a little internet therapy for these characters into this review.

It starts off easy enough, introducing us to Daphne and Kent, who have a fiery one-night stand in a bar. Naturally, these two are quickly revealed to actually be Kate (Reese Witherspoon) and Brad (Vince Vaughn), throwing a little role-play into their love life. They're shown having a refreshing debrief after the experience, sharing what they liked and would like to repeat or change. Good job! ("All three of our experts agree that this is an important part of role-play. Talk about what worked and what didn't.")

Kate and Brad are next seen taking dance classes, and we find out they don't subscribe to conventional ideas about whether they need marriage or kids to be happy. As long as they're on the same page and talking to each other about it, that's great! Those other people in the class, meanwhile, are unhealthily interested in some strangers' love lives.

We find out that Kate and Brad both have divorced parents, and they never go home for the holidays, opting to travel instead. Which is fine! ("You don’t have to go home (if you can’t afford it, if you dread it, if people will be mean to you)") It's less fine to lie to your parents about why you're not coming home. However, after we meet their parents, I can't seriously imagine blaming an actual Brad and Kate for the deception. Brad and Kate may not be awesome people, but no one deserves to be in this movie.

Unfortunately, weather means they can't get on a plane this year, and they end up agreeing to go visit all of their parents in succession over one long day. (Incidentally, given later events, daylight must last around 20 hours on December 25 in California for this to make any sense.)

First up is Brad's dad, and his brothers. Kate learns that Brad was born Orlando, but changed it, and that his family is violently abusive. I liked that Kate encouraged Brad to try to set some adult boundaries with his brothers, but once that was not working, their mistake was not enforcing the boundary by leaving at once. Family does not mean putting up with abuse. ("The standard you should apply in deciding whether or not to have an active relationship with him is the same one you should apply to all the relationships in your life: you will not be mistreated or disrespected or manipulated.")

But no, we have to get through a whole idiotic slapstick sequence of trying to install a satellite dish before they leave. It was horrible to sit through.

Next is Kate's mom and aunts, also her sister with husband and kids in tow. Her family seems okay, until they reveal that they knew about but did not protect Kate from mental and emotional trauma caused by constant bullying as a child, and in fact still think this is funny. I'm calling it: she's justified in cutting them off or limiting contact. ("You’re under no obligation to relive your siblings’ cruel jokes in front of the whole family for Christmas this year (and, surely, every year thereafter).") Her aunts and grandmother come on to Brad and continue to embarrass her with old photos and stories while she endures her own obnoxious slapstick sequence incited by the impulsive use of a pregnancy test, stolen by her niece.

As if that wasn't enough, Brad and Kate are dragged to a church service because her mom's boyfriend is a pastor, and then pressed into service as a substitute Joseph and Mary for a nativity play. Kate panics, and Brad hogs the spotlight, throwing her under the bus.

Eventually they move on to Brad's mom's house. His mom isn't as bad as his dad, although it is a little awkward that she expects him to just be relaxed with the fact that she's now romantically with one of his high school friends. One of the only genuinely funny scenes is in this sequence, when the couples all play Taboo and Brad's offensively-stereotypical-hillbilly brother and sister-in-law (who are much better behaved at the mom's house) wipe the floor with the other couples. We're supposed to learn from this that Brad and Kate don't know each other as well as they thought they did, but really we just learn that neither of them have good board game manners.

Finally last and least, Kate's dad. On the way, Kate tries to bring up the elephant in the room, that dealing with their families has both exposed the cracks in their relationship and made her second-guess whether she is actually comfortable continuing in their no-commitment, no-kids lifestyle. Brad blows off her concerns and she tells him not to join her at the last visit, but to go home.

Kate enjoys the visit with her dad. Her dad clearly had gone through a lot of stuff in years past, but is making a conscious choice to have an adult relationship with his daughters and get along with their mother and even the pastor boyfriend.

Brad, meanwhile goes back to his dad's to commiserate about his trouble with Kate. His father's approval of the way he walked away gives him pause.

Now here is the point where both Erin and I had thoughts about the plot. If the movie had either a) had the guts to let the characters be adults about where they were in life, discuss it and decide to break up permanently OR b) had Brad come back and explained that the realization that he was acting like his father caused him to second-guess his reaction and he was interested in having a conversation about marriage and kids as a possibility, but the ending left it ambiguous what happened... this might have been a different article. It wouldn't forgive the obnoxious 'humor' and horrible characters of most of the movie, but it would be saying something different, nuanced and interesting.

Of course it didn't do that.

Instead Brad came to see Kate at her dad's house and said that he wanted to spend his life with her and talk about marriage and kids, you know, maybe, and then cut! And a year later they have a baby. Way to shortcut a difficult conversation and life-changing decision. ("Having children, like getting married and choosing a career (if anyone has the luxury of doing that anymore), is a big decision, and it should be hemmed and hawed over.")

In the end, this movie merely sucked. It also propagated unhealthy relationship boundaries, juvenile decision-making and the fiction that everyone should be with their families for the holidays. Also it completely misrepresented members of the local press, who would not be let into a new mom's hospital room for the purposes of a cheap gag.
00's Comedy Dramedy Lindsay Movie Sucks