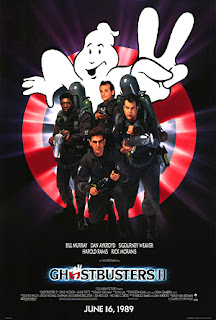 We've never bothered writing up this movie, because - first and foremost - it's a New Year's movie, not a Christmas one. I don't want to get into the full debate here over whether or not New Year's is functionally just an extension of Christmas - I think that's worth more exploration another time - in part because it's ultimately irrelevant. Whether or not New Year's pieces belong here, the majority of Ghostbusters II is set right before the holidays, and thus deserving of discussion.

The movie itself is somewhat controversial. Most die hard Ghostbusters fans despise it, and it's not hard to see why. The movie essentially retreads the premise and most of the story beats of part one. In fact, here's a synopsis for either film:

Three paranormal scientists (and Winston) are down on their luck and can't catch a break until dark forces rise up and they're the only ones who can stop them. Meanwhile, Venkman, the team's clown, strikes up a relationship with Dana Barrett, a client who's being harassed by a powerful evil spirit intent on using her as a symbolic mother. A nerdy character who's attracted to her is controlled by the same forces, and they wind up together at the site the dark spirit intends to use to take physical form and bring about the end our world. At first, the Ghostbusters aren't there to intervene, because they've been detained by a sniveling bureaucrat more interested in politics than in the well-being of the city, but the mayor comes to his senses in time to set them free. They race to the rescue, there's a massive sequence involving a three-hundred foot tall construct marching through New York, and the Ghostbusters save the day.

I don't believe the similarities are really what bother fans, though. Venkman, the star of part one, has lost most of his charm by part two. In the original, he comes off as a quirky trickster, but this time he feels pathetic most of the movie. His jokes fall flat compared to those taken by Egon and Ray, which is more than a little jarring. That said, I was a little torn on whether it was actually a problem on this viewing. In fact, it might have been intentional.

Even in the first movie, Venkman lived his life by mocking the world around him, and he became a hero because of it. But that sort of cynical attitude wears thin over time, and - years after his heyday - it's not at all unreasonable to think he'd come off as more of a loser than an underdog. This movie, after all, is about rejecting cynicism, and Venkman is, at his core, the most cynical character in either film.

Honestly, I can't tell whether I'm giving Ghostbusters II far too much credit. The movie has enough other missteps that we can be skeptical whether Venkman's portrayal was intentional at all: it could just as easily have been bad writing.

But while I find it hard not to resent Ghostbusters II for falling short of part one, I can't help but enjoy it anyway. If you can manage not to compare it with the first movie (which would be a lot easier if it deviated from the outline a little more), it's an incredibly fun comedy in its own right.

A lot of the jokes are entertaining, and most of the characters are ridiculous in an over-the-top way. In addition, I just can't help but love the Statue of Liberty resolution, even if it can't come close to competing with the Marshmallow Man.

As I said before, this is a New Year's movie more than a Christmas movie, but setting that up required building Christmas into the setting. Decorations and lights are integrated into several sets. Peter's apartment, for instance, contains a handful of garish decorations and a small metal tree, which reflects his personality at the start of the movie nicely. Dana's apartment, interestingly, contains no decorations besides a small snow globe containing a snowman, which Peter picks up and plays with. I'm not certain whether this was meant to portray an aspect of her character (the fact fun has almost entirely seeped out of her life?) or if it was just something random Bill Murray had on hand when they were filming.

It should be noted that the presence of Christmas is actually a problem for the film's narrative: the villain is empowered by New Yorkers' negative emotions, and you'd expect for Christmas to at least pose a hurdle. However, since the movie occurs over the month of December, the holidays fall late in the story, presenting a potential pacing issue. Rather than trying to reconcile this, the movie seems to bypass Christmas itself. There's a great deal of buildup in the background, but we're never actually shown the holiday (unless the short, iconic sequence where the Ghostbusters are briefly shown wearing Santa hats in the middle of a montage is supposed to be the 25th). Given how significant the day is to the city and how ubiquitous the presence of decorations was throughout, you'd expect some acknowledgment: if you're looking for it, it's a jarring omission from the timeline.

The movie begs the question: why didn't they just conclude the story on Christmas Eve instead of New Year's? Goodwill and positive emotions are certainly better associated with that day than the 31st. On top of that, the villain's plan is to take human form by being reborn into the body of a baby. Wouldn't the story of a god trying to take on human flesh resonate better if it coincided with Christmas?

Then again, maybe it resonated a little too well. It's not hard to imagine that plot offending a lot of people, and Ghostbusters II - to a flaw - was clearly meant to be inoffensive. I can't help but wonder if the original plan was to mirror the nativity with a dark twist, only for someone to get cold feet and alter the trajectory. Then again, I can just as easily picture them having set the finale at New Years to capitalize on the annual party for crowd scenes or even to prevent having the movie culminate in that crowd countering the psychic energy of a reincarnated evil magician with a rendition of Here Comes Santa Claus. While Auld Lang Syne is still a silly song, it's a hell of a lot less so than any tune a crowd of Christmas carolers are likely to break into.

Regardless of how it happened, Ghostbusters II is a bizarre case where a holiday movie essentially seems to forget Christmas and jump to New Years.

While this certainly isn't a worthy successor to Ghostbusters, it's a hell of a lot better than the vast majority of unofficial Ghostbusters clones out there and a funny, enjoyable holiday film. It's not a bad movie, even if it is a disappointing one.
80's Comedy Erin Snyder Fantasy Horror Movie