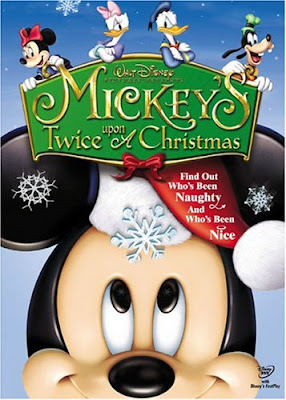 We went into this with a lot of trepidation, between the snooze fest that was the predecessor and the cruddy-looking CG. However, this special was actually much better than the first!

It follows basically the same format - short pieces linked by pedantic narration - but the pieces themselves are far superior. It’s as though the people writing them actually liked their jobs, liked the characters and cared about the humor (again, completely unlike the first special).

Furthermore, the special is the same length, but there are five pieces instead of three. The shorter format is much stronger.

The first piece combines artistry and humor as Minnie and Daisy try to outdo each other as the stars of an amateur skating show. They each have backup skaters from the Fantasia Dance of the Hours sequence. It’s sweet and funny without getting too sappy, and we were surprised with how decent the animation was.

(Complete side note: I don’t know if shipping Minnie and Daisy together is a thing, but if it is, those people should watch this piece. Total close-friendship-could-be-read-as-something-else going on here.)

The animation throughout is really decent. It helps that it doesn’t try to make the Disney characters more “realistic”, and the backgrounds stay highly stylized. Although, I guess is what I’m saying is the whole thing could have been done in 2D and not been different.

In the second piece, Huey, Dewey and Louie break into Santa’s workshop to try and write themselves into the Nice list. There is a lot of slapstick and physical humor in this one, but for the most part it works. We liked the set-up, we liked Santa’s operation. You can see some design ideas here that may have influenced Prep and Landing. This ends with the boys taking responsibility for causing trouble and remembering to think of others. Happily, the tone stays light and funny enough that the moral doesn’t sink into a cheesefest.

The next one pulls a bit of a 180 from the Goofy piece in Once Upon a Christmas. Max is now an adult (possibly a college student, possibly a little older, it’s not specified) and is bringing a serious girlfriend home for the holidays. All he wants is for his dad to not completely embarrass him. Most of the piece is done as montage over a song. The song is far too repetitive, but not out of tone for the piece. I found the whole thing sweet, although your patience with and enjoyment of this piece may be directly proportional to whether you loved A Goofy Movie in 1995.

In the fourth short, all Donald wants for Christmas is peace and quiet, but he’s haunted by carolers and bothered by family. This is probably the funniest piece. It does a great job with the kind of furious slapstick that Donald is best at. The ramp up to the climax was enjoyable enough that we didn’t even mind when it turns a bit cheesy in a heartfelt closing.

Finally, the last piece is about Mickey and Pluto. After Pluto destroys Mickey’s elaborate Christmas decorations, the dog is banished from the house in anger. While Mickey is out trying to replace his things before a planned celebration, Pluto runs off in shame and despair. He ends up riding a train all the way to the North Pole, where he’s adopted by Santa’s reindeer. Of course Pluto misses Mickey and Mickey’s in a panic when he realizes Pluto is gone. Everything turns out fine in the end of course, and all the other characters come by to close out the special with a little music.

That’s one last way in which this special was better than the first: the stories plausibly take place in the same world, which allows for a stronger closing and allows it to feel more like one coherent piece overall.

Was this brilliant, can’t-miss animation? No, but it was a heck of a lot of fun. If you’re a fan of the characters, you can catch this one on Netflix.
00's CG Comedy Lindsay Special