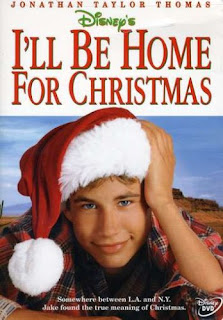 I'm having a very hard time resolving how lazy the construction of the individual scenes of this movie was with the fact that the premise was a relatively ingenious re-imagining of The Odyssey built around an eighteen year old trying to get home for the holidays. It's worth noting I'll Be Home For Christmas did this a few years before O Brother, Where Art Thou? got a lot of attention for a similar gimmick (though - needless to say - O Brother did it much, much better).

Jonathan Taylor Thomas plays Jake, the Odysseus character. Like his archetype, he's a pathological liar and conman. At the start of the movie, Jake is at college in Los Angeles, along with his girlfriend, Allie, who comes from the same town on Long Island (it's a plot point later that her family only lives a few blocks from his). If this seems absurdly unlikely, it's worth noting that you'll also have to suspend your disbelief around the film's portrayal of college, a place where nerds are locked in their lockers by jocks. Oh, and it's established that Jake's been at college for a few years, despite being eighteen.

Perhaps a few more rounds of editing were in order.

Jake and Allie have a fight when he tries to get her to stay in California with him for Christmas. We learn that Jake's mother passed away a few years earlier, his father remarried, and he's stayed away during the holidays since. His father offers Jake his 1957 Porsche to come back this year, which of course changes his mind. All he has to do is get home in time for dinner on Christmas Eve, and he gets the car.

That's worth, what? Seventy-five thousand dollars? Once you're done suspending your disbelief in carbonite, we can move on.

He makes plans to travel with Allie, but first has a plan to make some money off some jocks by helping them cheat. Eddie, a rival for Allie's affections, discovers the plan, messes it up, then frames Jake to make it look like he was trying to screw them. Eddie and the jocks knock Jake unconscious, dress him in a Santa suit, glue a beard and hat on him, and leave him in the dessert. The fact this doesn't kill him is almost plausible relative to that Porsche thing.

Meanwhile, Eddie shows up when Allie thinks she's been stood up. She agrees to drive across the country with him, despite not liking or trusting him. That's actually a little less believable than the Porsche bribe.

What follows is a series of misadventures as Jake tries to get across the country and Eddie, despite being portrayed as a despicable excuse for a human being, respects Allie's boundaries and wishes. I'm not going to go through the various sequences - they're really not all that relevant to the plot.

The resolution follows a (semi) reformed Jake, as he steals a sleigh, makes things right with Allie, then intentionally shows up a minute late to demonstrate he doesn't care about the car anymore: what's really important is family.

I think I'm going to throw up. Coincidentally, Jake threw up in the back of a car in Nevada. I think this means something.

The movie was not good. It was poorly written and rarely funny. That said, I was impressed how deep the parallels ran between Jake and Odysseus. They actually did a good job capturing his instinctive proclivity for lying, as well as his skill. The character is as super-humanly successful in manipulating those around him as the Greek hero. They even touched on his relationship with the gods, swapping out Athena for Father Christmas. Nothing objectively supernatural occurs, but there's a sequence I found very reminiscent of Odysseus's pleas to his patron goddess.

At its core, this was a modern retelling of the epic. Unfortunately, it was also a crappy holiday comedy. And, while its source material may be interesting from an academic perspective, the movie itself is a pain to sit through.
90's Comedy Erin Snyder Movie Sucks