Showing posts from September 8, 2013
Show all

The Date is Set

By Erin Snyder - September 10, 2013
The most recent "How to do Everything" podcast opened with a statistician calculating the date of the Christmas Singularity, when Christmas Creep will cause holiday decorations to start appearing the previous Christmas. He crunched some numbers and came up with 2099, which was already slated to be an interesting year . Have a listen if you're interested . The Christmas section only occupies the first few minutes, but the rest of the podcast is pretty interesting, assuming you care about things that aren't Christmas.
Post a Comment
Read more 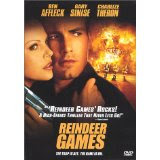 For the record, we didn't go out of our way to watch this because of the Affleck connection: this has been sitting in our NetFlix queue for months, slowly climbing its way to the top. And now that it's there, we finally got to watch the damn thing. It. Is. Bad. It's almost impressively bad. With the right crowd - and the right drinks - this thing could easily cross the fabled line into "so bad it's good." But it doesn't earn that honor, not on its own merits; it would take a huge amount of work from the audience to meet it halfway. And, frankly, we just didn't have the energy. The plot is borderline comical. For a solid twenty minutes, I almost gave this the benefit of the doubt and assumed it was intended as a comedy, albeit one lacking in humor. But, as the movie dragged on, it became crystal clear I was being far too kind: this was supposed to be suspenseful. We were supposed to care about the characters. Let me see if I can summarize the
Post a Comment
Read more
More posts