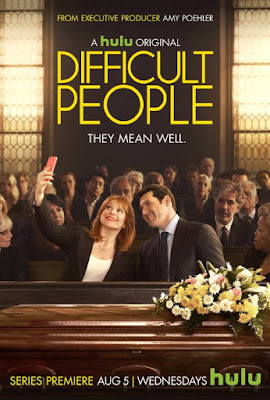 I thought it was freaking hilarious.

This is the first episode we've seen, so we had to figure out characters and their relationships from context. This wasn't a problem, and it even created a funny moment when one character was explaining her ‘suicide season’ surge pricing, and I said, “oh, she's a therapist?” right before the dialogue confirmed it.

The story follows the two main characters, who are both friends and aspiring comedians, through their holiday stress. Billy has to help with his niece with his brother out of town, so he takes the opportunity to sign her up for dance classes at a specific studio in hopes of joining the ‘gay dad mafia,’ thereby getting a leg up in his show business career. Julie has to deal with her boyfriend's ridiculously WASP family and her mother's capacity for tying emotional dependency to financial assistance. She tries to get a job; it doesn't go well.

In the time-honored trend of Christmas episodes, it ends with a musical number: Bitter on Christmas.

I'm a little in love.

The show reminds me a little of Seinfeld, mostly in that the plot is just about day-to-day life and the characters aren't nice people. However, I personally think this is much funnier, and of course it's much more of the moment. (This is a Hulu original series, after all.)

The cast all has excellent comic timing and the writing is tight and snappy. I’ll check out another episode some time, and I’ll keep the snarky humor of this one in my back pocket for the next time something trying to be ‘feel-good’ comes up in our queue.
2015 Comedy Episode Lindsay