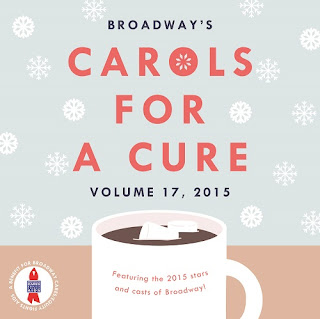 I bought the 2011 Carols for a Cure album in person in New York, and I’ve meant to pick up another one ever since. I love the combination of classic carols and new songs, all done by current Broadway singers. I was excited to find that they’re now all available in MP3 for those of us not able to pick them up on Broadway!

The 2015 volume has a lot of gems. Here’s a quick run-down of what you’ll find this year:

CHRISTMAS VACATION - The cast of Beautiful - The Carole King Musical
Hey, this is a good reminder that I actually like this song when it’s divorced from the terrible movie. Fun!

JOY TO THE WORLD - The cast of Hamilton
I'll admit it, this song is a big part of why I hunted down this album. Per the Mainlining Christmas rules, I can't go back to listening to Hamilton over and over until Dec 26, so this'll have to hold me over.
This track opens with narration and segues into the song, done in a style of overlapping harmonies and echoing lines that heavily evokes the Hamilton score. It also features a quote from Jefferson about belief and a short speech regarding freedom of religion. Neat.

HAPPY ALL THE TIME - The cast of Elf
This song was written for the Elf stage musical, and hearing it was the only good thing about the animated Elf special, so I’m happy enough to have this version.

GO TELL IT ON THE MOUNTAIN - The cast of Finding Neverland
Huh. I usually don’t like this song, but do it as an upbeat bluegrass ditty, and it’s kinda catchy!

A CRUNCHEM HALL CHRISTMAS - The cast of Matilda The Musical
Ooh, I can get behind a creepy, mostly-dissonant song about waiting for the start of vacation sung by British children.

WE THREE COOL KINGS - The cast of At This Performance
This is nice. Jazz meshes gorgeously with the original harmonies; this manages to keep the best of the original song and layer a lot more lush sound on top.

AULD LANG SYNE/RIVER - The cast of The King and I
Auld Lang Syne is very traditional and lovely, then transitions into River. It’s a nice recording, with three voice harmony on the chorus.

I SAW THREE SHIPS - The cast of The Phantom of the Opera
This is the first one that’s just… an okay recording of a traditional song. Nothing exciting or that interesting, although I guess there’s some good use of harmony.

SIGN OF THE DOVE - The cast of Dames at Sea
I’ve never heard this song, which either means it’s original or obscure. I’m betting on obscure. I was kind of enjoying it and the anti-consumerist message until we hit the chorus. The chorus is not only super-religious, the melody is ridiculously hokey. On the upside, it’s begging for a subversive version to that same stupidly upbeat tune.

CHRISTMAS IN FISHNETS - The cast of Chicago
That’s more like it! The ladies of Chicago give us a sultry love song to the life of a performer during the holiday season. The writing could have been more clever, but it’s plenty fun.

ONE LITTLE CHRISTMAS TREE - The cast of Kinky Boots
This could easily be too sappy, but the light dance/synth beat and the children’s voices really come together to make it cute, but not obnoxious.

HOME'S WITH YOU - The cast of Fun Home
This sweet original number celebrates non-traditional families and friend-families celebrating together. (Listen for free here) Everyone together now: Awwww.

O HOLY NIGHT - The cast of A Gentleman's Guide to Love and Murder
Their version is pretty straight, but if you like this song (I don’t especially) it’s nicely done.

ONE STAR - The cast of Les Miserables
Huh, Les Mis is not the show I would have expected to lay on the autotune, digital effects and synth echo. This song/medley starts off slow, but it builds and builds to a wall of voice and sound. The tone is different enough from most holiday songs that I kinda like it.

MARY, DID YOU KNOW? - The cast of School of Rock
I’m not a huge fan of this one, but the singing is well done.

GOD REST YE MERRY GENTLEMEN - The cast of Aladdin
The cast of Aladdin have a ton of fun flipping back and forth between a very proper harpsichord version and a jazz version of the song, with plenty of scat. I like this one a LOT.

THE FIRST NOEL - The cast of Amazing Grace
This starts out pretty traditional, but the addition of a good beat and some energy does a lot to help this song.

AVE MARIA/HEARD THE BELLS - The cast of Wicked
You know, I don't know that I’ve ever heard a version of I Heard the Bells on Christmas Day that did more than the first or second verse. I didn't know it was about peace on earth in the face of war. I don’t hate this. Ave Maria is very pretty and, whatever I think of the religious content, Arielle Jacobs imbues the ‘Bells’ lyrics with impressive gravitas.


Not every track is a winner for me, but there's enough great stuff that I’m thrilled to add this to my holiday music rotation.