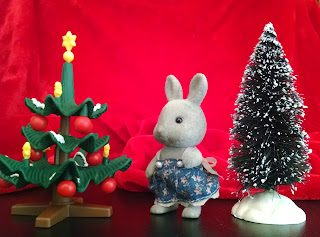 I have been seeing this book on lists of favorite Christmas books since we started the Mainlining project. But reading the back cover blurb made it sound entirely like a cheese-fest, overly religious, or otherwise sanctimonious, so I'd been putting it off. 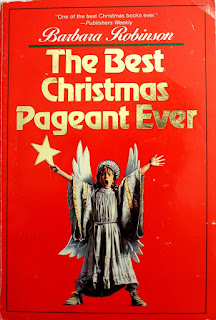 I have to admit, though, for an eighty-page book written for young readers, this is impressively subversive. Although, it probably seemed less so in 1972.

The plot regards a group of unruly siblings who take over the Christmas pageant in a small town. In doing so, they force the townspeople to confront the reality behind the rote recitation of the myth. This may come as close as any religious-ish story ever has of evoking actual emotion in my cold, dead soul.

The most interesting thing is the narrator. The story is told in the first person, by a young girl. Her opinions and asides add color, humor and context.

The narrator is observant enough to report on all the things that 'everyone knows', while being open-minded enough to allow for other perspectives or new information. The narrator stays very childlike, though, which I think is key to the appeal. You never feel the hand of the adult author shaping the message. A child, in fact, could probably read this book and not realize how skillfully the message of kindness, charity and wonder is woven in.

I was bothered by the first chapter of the book, when the narrator is unquestioningly describing the Herdman family and the awful things they do. But it's exactly the unthinking way that a child thinks about other children: they must just be born bad, no one blames their father for running off, everyone hates them because they're bullies... while the same description allows for an adult reader to see through to a struggling family where the kids lash out at a society that doesn't care about them. The classism and callousness from the townspeople only gets worse over the course of the story, but because of the narrative voice, I didn’t feel hit over the head with it.

I've seen stories along these themes before, that either directly play with the logic of the nativity story or use parallels to explore the emotion or potential reality behind it. This fall, we've seen this narrative across social media with many pointing out that anyone who would tell a refugee family from a war-torn region that there is 'no room' in our country should really think about whether they can call themselves Christian.

The Herdman children have never encountered the details of the Nativity story before taking over the pageant, so they have lots of practical questions, like why didn't Joseph just box the innkeeper's ears if he was rude enough to leave a pregnant woman outside? They put everything into context in a way the other children and even the adults in the town never thought about, and in the end they bring out all the pathos in the plight of a young couple with no one and nothing to help them.

The style is light and funny enough that it never feels preachy, but I did find the ending quite moving. Which is super weird, for me.

I’ll admit it, this book probably belongs on all those 'best-of' lists.
70's Book Lindsay Religious