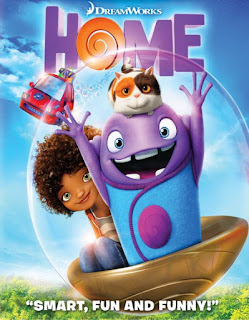 Home is a CG science fiction comedy from last year that’s ambiguously a Christmas movie. It’s loosely based on the 2007 novel, The True Meaning of Smekday . It’s not a clear enough example to be covered in the normal season, but we felt it deserved a spot in our archives. We’re trying something a little different on this one: instead of posting a review written by one of us, we’re presenting this as a discussion. Let us know what you think of the format: we're thinking of adding it to our standard repertoire. Erin: Let’s start with the story. The movie is set immediately after the events of a disappointingly bloodless alien invasion where the human race is transported to Australia. A girl’s left behind, and she befriends an outcast alien who’s inadvertently endangered the planet by sending a party evite to another alien race. The girl’s trying to find her mom, and the alien’s trying to undo the damage he’s done. You get the idea. Unlike me, you actually read the book. How
Post a Comment
Read more
More posts