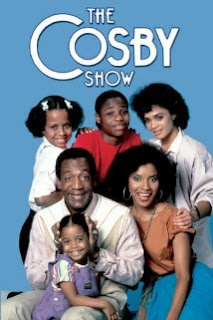 It's difficult to convey how influential and important The Cosby Show was. It easily belongs on a short list of most significant sitcoms ever produced. In addition, it was quite good. The humor holds up extremely well, as do many of the emotional character moments. Moreover, in portraying a funny, successful black family living the American dream, The Cosby Show helped tear down stereotypes. The fact that it was extremely successful while doing so demonstrated a wide audience for diversity in entertainment.

Of course, all of this has been overshadowed by the revelations that the series's lead and mastermind spent decades drugging and raping women. Repeats of the show have been pulled almost everywhere, but we were surprised to discover it on Hulu.

Surprisingly, The Cosby Show included only a handful of Christmas episodes, none of which fit the traditional holiday archetypes. There were three we located set around Christmas, though only one was particularly focused on this fact.


Season 1: Father's Day (1984)
Not a typo: this odd episode is, in fact, set around Christmas. It opens with Cliff (played by an unrepentant serial rapist) arguing with his wife (played by the brilliant and talented Phylicia Rashad) on the quality of the Father's Day gifts he's received over the years. He proceeds to put on the various pieces of clothing - almost all of which light up - then confronts his children. He points out that they've failed to put much thought into their gifts and changes them to do better next year.

Instead, they go out in the middle of the Christmas shopping season, purchase what they consider to be more thoughtful gifts, then throw Cliff a Father's Day in December. While the gifts really aren't much better than the ones they'd bought him in the past, he's impressed by their initiative and the thought they put behind the purchases. In addition, Clair gives him something more thoughtful.

This episode, like most, was primarily just comedic. There was little to no real tension: just a charming, sweet story of a quirky family in Brooklyn. It was enjoyable and funny, but - aside for one scene midway through - it didn't try to offer anything of substance like a deeper message or emotional gravitas.

The exception was a sequence where Cliff, in his role as a doctor, met with the husband of a pregnant patient. The man was extremely conservative and held antiquated beliefs about masculinity and the role of women. Ironically, Cliff gave him a lesson on the realities of modern life (ironic, of course, because the actor playing the role is a sexual predator who is, quite possibly, the least qualified human alive to speak on gender roles).

The holiday elements were sparse. Overall, it used Christmas as something of a joke, playing up the absurdity of shopping for and giving Father's Day presents a week or two before Christmas.


Season 6: Getting to Know You (1989)
This season added a few new characters: one of the daughters married a single father between seasons, which allowed the show runners to introduce a new character: Olivia Kendall, played by a very young Raven-Symoné. The character, of course, was added as the resident adorable child, replacing Rudy, who was getting older.

Due to the immediate addition of new family members, a lot of this season seems to have been built around getting to know them. In this case, it was Cliff Huxtable and his new son in law, Lt. Martin Kendall. The episode opens with a sequence set in a crowded restaurant. Martin is waiting for Cliff when he's seated with two attractive women about his age. They try flirting with him, only for him to inform them he's married. When Cliff does arrive, they playfully try to get Martin in trouble, a trick they try again when Theo shows up.

It's a funny scene, largely thanks to the two actresses, who do a great job with the material. Unfortunately, the scene is somewhat colored by the revelations about the series's lead. While the actresses play the parts as playful, the writing could be interpreted as sexually manipulative and vindictive, traits often assigned to women by misogynists. Not all women in the show are portrayed in such a way, but this isn't surprising: it's not unusual for misogynists to divide women into "good" and "bad" categories.

This isn't the only time the episode treads into such territory, either. Later, Cliff and Martin share a scene where they have a heart-to-heart discussion about Denise and Martin eloping without the family's knowledge. This interchange culminates in Cliff asking if Martin and Denise slept together prior to their wedding night. Martin assures Cliff they did not and goes so far as to inform him Denise was still a virgin. After learning this, Cliff does a literal dance of joy.

That scene would be creepy as hell even if the actor wasn't a sadistic rapist with no respect for women's control over their own bodies. Given that information, it's even more disturbing.

All of that was structured around Cliff being bothered by the fact he'd never been able to give his daughter away, which was resolved with a brief pretend wedding ceremony in the living room. I'll let you decide whether this should be viewed as a kindhearted gesture or yet another example of society controlling a woman's sexuality.

Much of the rest of the episode centered around Christmas. Olivia, having noticed different mall Santas are different races, starts questioning the race of the real Claus. Cliff explains that he changes his appearance from house to house, not a bad direction all things considered (it's certainly better than Fox News managed).

There's also a subplot involving Elvin dressing up as a Christmas elf. The best word for this is "weird." Between this and prolonged talk about Santa Claus, this was by far the most Christmasy of the three episodes set during the season.

While this was a problematic episode, it was also a funny one. Most of the jokes worked, thanks largely to the timing and delivery of the cast. Seeing multiple characters having to explain the flirtatious women - especially when others are trying to put a more ominous spin on the situation - was more fun than it should have been, even with the troubling connotations.


Season 8: Clair's Place (1991)
This episode, made during the series's last season, sort of mirrors their first Christmas episode. While it's not explicitly about Mother's Day at Christmas, the premise strongly implies it. Once again, the episode occurs a little before Christmas. The family surprises Clair by giving her an office of her own. The room is soundproof and accessed with a keypad she alone has the code for. After this, she essentially spends the remainder of the episode on her own, enjoying her newly found freedom.

Meanwhile, the kids try to make Christmas cookies, and Cliff guilts Theo into preparing the Christmas lights. As usual, there's some good humor thanks to the cast (with Phylicia Rashad getting most of the best moments).

The joke is that the kids aren't able to do much of anything when their mother isn't there to help. There's not really much in the way of resolution - the lights eventually go up, and Cliff locks the kids outside for a laugh, then goes to cuddle his wife.

There were a handful of humorous moments, but I found it the weakest of the three episodes.
80's 90's Comedy Episode Erin Snyder