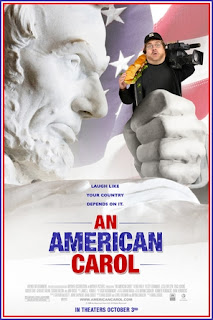 This is one of those movies that's sort of on the boundary of what we'd consider discussing. It's not set at or about Christmas, but depending on your point of view it's either derivative of or based on arguably the most famous Christmas story set in December (we all know the manger thing happened in the fall, right?). On top of that, An American Carol has particular significance to another project I'm working on for later this year. For reasons not even I can explain, I seem to have decided 2022 would be the year I finally watched through the various adaptations of A Christmas Carol, or at least all the significant ones. And while this falls near the low end of the spectrum of both the significance and adaptation metrics, it was released theatrically, so I decided to give it a watch. Set in America in the "present" of 2008, the movie applies the "Christmas Carol" template to the 4th of July and the War on Terror in order to lampoon liberalism. I
Post a Comment
Read more
More posts