Showing posts with the label News
Show all 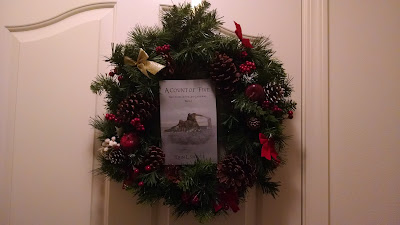 Let me just get this out of the way up front: this doesn't have a damned thing to do with Christmas. The wreath was just a cheap attempt to obfuscate that fact: sorry for the deception.

A Count of Five is my new novel, which is now available on Amazon. You can pick up the Kindle version here for just $2.99, or you can buy a paperback version for $9.99.

This is the first book in The Citadel of the Last Gathering, a new series blending fantasy-adventure, science fiction, and quite a few other surprises. We're planning on releasing the second novel in the series this November.

This represents a lot of work from both me and Lindsay, who edited and laid out the novel. We're extremely proud of the finished product, and hope you'll pick up a copy and give it a read.
Post a Comment
Read more

By Erin Snyder - December 12, 2013
In what may be the single greatest Fox News clip ever recorded, Megyn Kelly hosts a frank discussion about race with a bunch of white people. This video is required viewing:


To recap, Jesus and Santa Claus are historical figures. And they were white. This actually contradicts the prevailing view that Jesus's precise ethnicity is unknown (though probably not "white") and Santa Claus is a mythical being representing an amalgamation of figures from folklore, as well as stories about a fourth-century bishop.

But according to Kelly, both are historic figures, both are white, and this is a "verifiable fact."

Break out the champagne, people, because this is the best news we could have hoped for. You see, there's only one way she could possibly be that certain about Jesus's skin color: time-travel must have been invented.

Because no self-respecting journalist - really, no human with even a shred of integrity - would ever say somet…
Post a Comment
Read more

By Erin Snyder - November 18, 2013
So, they're making a sequel to It's a Wonderful Life. The actress who played the kid in the original is going to be an angel this time (I'm not sure whether she's playing a different character or if Zuzu met some unfortunate fate and is returning from the great beyond). Regardless, she's assigned to the grandson of George Bailey, and the twist is that she's making a case against his life. In other words, the world actually would have been better off if he'd never been born.

I'm of two minds about this. On one hand, it's a better premise than simply redoing the original. In fact, when I don't think too hard about it, it seems like a great premise.

The problem is that, when you invert It's a Wonderful Life, you wind up with A Christmas Carol. The angel is demonstrating to the lead that he's lived his life poorly in order to get him to change his ways: sound familiar?

In fact, it's so similar, you'd almost think that It's a Wond…
1 comment
Read more

It's What's for Dinner

By Erin Snyder - November 01, 2013
As Americans, we're used to winning. We're used to being the best, especially when it comes to war. But if we want to hold on to our crown, we're going to have to step up our game this holiday season, because England has completely redefined the war for Christmas. They're relatively secular, so their fight isn't over chopping Jesus up and stuffing him in boxes in a misguided attempt to put Christ in Christmas: they've found another issue to fight over.

ABC has an article up about some animals rights and environmental groups battling to keep reindeer out of Christmas. Specifically, Christmas dinner: a supermarket chain is getting ready to sell the meat to families who want something with a clearer holiday connection than ham.

I don't really have much invested in either side of this debate, beyond being amused there's that much interest in reindeer meat during the holiday season. The stuff isn't cheap, either - about $12/lb. I'm sure the groups fig…
Post a Comment
Read more

It's Like Christmas in July, Only With More People Trampled to Death 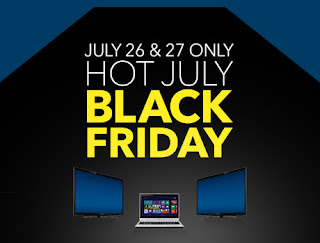 In a true sign of the times, Best Buy is holding a Black Friday in July event tomorrow. You can find sale information on their site here.

A quick search verifies the word "Christmas" doesn't appear anywhere on the sale page. Yet another example of corporations bowing to special interests trying to remove Christ from mobs of screaming shoppers clawing at each other's throats in a mad rush for discount MP3 players.

All I can say is the 4th of July better watch its back: Black Friday has taken its rightful place as a holiday in its own right, and there's little point debating which day is truly more American.

I just wish we'd had more notice. We didn't even have time to buy a turkey for dinner tonight.
1 comment
Read more

By Erin Snyder - December 29, 2012
CNN is reporting that Santa Claus personally delivered a Nintendo 3DS to a child containing pornographic imagery. The 3DS was purchased - by Santa or one of his elves - from a GameStop. Against North Pole policy, the gaming system was purchased refurbished: the imagery had been installed by a previous owner.

GameStop has apologized for the mistake and has given a replacement system - along with additional merchandise - to the family.