Fiction: He Came Down the Chimney, By: Erin L. Snyder 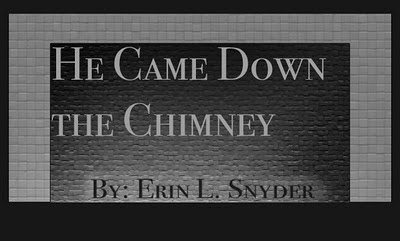 Last Christmas a doll came for my daughter beneath the tree, wrapped in gold foil and tied with a bow. While playing the following spring, she dropped the toy down the stairs, and the impact split open the doll’s head. Wedged inside the neck was a handful of rolled up papers. The handwriting was almost illegible, but after a few hours, I was able to transcribe them, embellishing nothing beyond a word here or there I couldn’t identify or finishing the occasional sentence where the writer’s thoughts had wandered or he’d used the wrong term.

Even before he came, I knew there were things like him in the world. My mother was not born in this land, and she told me such stories. My father said it silly, but even as a boy I was smart enough to know the real from the fake, and to know that science and its ilk, while having its uses, painted pictures of a fairytale world of machines and mechanizations, and that the real world was something different.

So it was that I knew him when I set eyes upon him. Shall I bore you with details? How I sneaked from my bed in the dead of night to pee or for a glass of water? How in truth I was looking for him to test my belief, the belief of a boy in magic? How I was six or seven or eight years old?

What matter such details? What matter whether the tree was draped in ornaments of red and blue or a Victorian thing of silver? Was there snow on the ground outside that Christmas Eve, or was our yard coated in brown mud and dead grass?

Bah! Even if I wanted to relate such details, I could not. So much time has passed, I don’t remember my age or the decorations or the year. I don’t remember whether we had a dog still or if it had run off. When you are old, such things… they mix and blend. And I am so very old.

But I remember being up, and I remember hearing a noise upon the roof. I remember thinking of bells and deer, though I heard no such things. I hid behind a door and waited, my eyes on the chimney.

And, like the stories, he came down. It seemed funny before then, how does so large a man come down small chimneys? Not so funny after. Not so funny once I’d seen.

Because I understood it all then, and I wasn’t so excited. No. I was frightened.

I watched him remove the boxes from his sack and place them beneath the tree. Then he slid baubles and candy canes into the stockings, before gathering the cookies and milk and taking them to the kitchen. I followed, still hidden – always hidden – and watched him crush the cookies to crumbs and wash them down the sink with the milk. Then, I watched him return the plate and glass to our table with a smile.

His face was so thin.

And he was up the chimney, as he’d arrived. I returned at once to my bed. I did not sleep but covered myself. I was a boy, and what is a boy to do when he’s seen such things? What can he do?

I threw out my toys, of course, no matter my parents’ protests. And the next year, I begged them to hang no tree or stocking.

It didn’t matter: he left gifts all the same. For years, I read books, read about his kind. I heard my mother’s stories whenever she would tell them, and asked such questions. Because, even as a boy, I knew what must be done, just as I knew I would need wait until I was a man.

This task was not one for a boy.

As I grew, I studied and reasoned. And I prepared. I would tarry at school until they let the larger boys out. Then I would pick fights, so I would be strong and used to pain.

When I was a man, I was ready, but I did not act at first. I waited until my parents had died, in case I failed. I never married and sought no friends, less they suffer in my place.

And I prepared my home for him.

I bought things from thrift stores. Children’s things – clothes, toys, anything that might hold their scent – and I scattered these about before Christmas. I put up decorations, so everything would seem in order. And I prepared the traps and weapons, of course.

On Christmas Eve, I sat in wait. Like so many years before, I sat in hiding, watching. Until I heard something on my roof. And this time I knew there would be no hooves or sleigh bells. Then I watched the fireplace.

Again, he came down the chimney, and again it made no difference how small the passage or whether there was a fire or grate to meet him, because he came down as smoke and ash. Only when he’d reached the bottom did he take a form like that of a man.

He was as tall as I’d remembered, and hunched beneath the weight of his sack. His face was thin and pale, his eyes dark, like glass marbles. While there was no weight to his cheeks, his body was large and bloated. It made no difference, though: he was quick and moved silently.

I waited, not daring to breathe as he did not breathe, until he’d placed the toys and gathered the cookies and milk. Then, softly, I followed him into the kitchen. I moved as quietly as I could, but he must have heard my footfall, because he spoke as he emptied the milk. His voice was like that of my mother’s friends from the old world.

“Go. You should not wake the children.”

“There are no children here,” I answered, and he turned to look on me.

I held up my cross, and he turned away. “Bastard!” he shrieked. “Do you know who I am?” He covered his eyes to keep them from falling on my cross, a symbol not part of the holidays.

I paid him no heed, and came closer, raising my stake. I brought it down at him, but in my haste, had drawn back my other hand and the cross. He was so fast. He caught my wrist and squeezed: the stake fell.

But I wasn’t through. I thrust the cross into his face, and he screeched, releasing me and falling back into a corner. I recovered the stake and put it into my pocket, removing a zip lock bag full of water I’d taken from the church fountain.

I threw it at the wall behind him, and it burst, showering around him. Wisps of smoke emerged from his skin where the droplets struck, and he grew angry. “I’ll kill you,” he hissed.

I held the cross higher and approached. He could not meet my gaze, and seemed held in place by the symbol. “You won’t take another child,” I swore.

“Never… a child,” he said, sounding pained. “Not on Christmas or any night.” He seemed to be trying to explain, but I would not let him.

This time, I did not waver or drop my guard. Instead, I brought my hands down together, stake first with the cross behind it, like a hammer driving in a hail, straight into his bloated chest, and the stake stuck.

Everything was so still for a moment, unmoving, and I was so tired. Panting, I released the stake and my arms fell to my sides.

The cross fell with them. Because it was over. It had to be over, because I’d finished it.

His hand lashed like a whip. There was a sudden surge of pain in my hand. Behind me, on the kitchen tile, I heard something metal hit the floor. It was my cross.

My throat was in his hand, and I gasped for breath while he swatted away the stake from his chest. There was no blood. Not a drop.

“Not fat,” he said, sounding tired himself. Tired, but so very angry. “Padding. The children, they like the padding. Just like the stories.” I tried to fight him, tried to struggle, but he tightened his grip, and I could do nothing. “What you tried to take from them….” He shook his head. “Christmas. You would have taken Christmas from all of them. I am Santa. Don’t you see?”

His grip tightened more, and blackness began to creep over him. I heard something strain, and waited for my neck to break. But, at the last minute he relented. But he did not let go. “I swore. Never on Christmas. Never to kill. Even one like you.” He smiled. “But only on Christmas.”

He shook me, and everything went dark. After that, I had a sensation of flying. I remember gazing down and seeing trees and roads and houses far below. But perhaps it was all dreams. I cannot say.

When I woke, I was lying on a stone floor, all but frozen. There were no windows and there was no light. I’d say I didn’t know how long I lay there, but I know. He told me his oath was only for Christmas, so I was there a day.

When he opened the door, he brought a candle for light. His eyes flickered in it like some night-animal’s. And he shut the door behind him. I waited for the end, but he was not so merciful.

There was death, as he’d promised, but there was no end.

Now I exist here, in his castle. I work here, in the dark, beside the others who’d thought to rid the world of this creature. Together, we make toys, according to his instruction, and we will do so forever. He brings us things to eat, rats mostly, and the occasional dog or pig. Sometimes we hear him with visitors: he drinks far more succulent meals, though as he swore, I’ve never seen him take a child.

If, on some Christmas or another, he should not return, we will waste away. And yet, I welcome this thought. Cherish it. But I do not dare hope.

If you should find this story, though, you know what you must do. You know what he is, and why he must die. But remember he is fast and wily. And, above all else, remember that there is padding beneath his red coat.
Erin Snyder Fiction