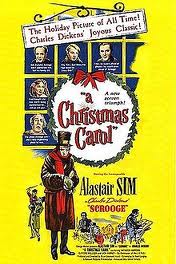 There have been many, many adaptations of A Christmas Carol. This isn't the first we've looked at, and assuming this blog pops up again next Christmas, I don't think it'll be the last.

The 1951 version starring Alastair Sim is generally recognized as the best of the bunch. I haven't seen nearly enough to render that verdict, though this is certainly better than the Jim Carrey vehicle that came out a few years ago. If we're counting parodies, though, it's not even close to Blackadder's Christmas Carol or Scrooged, and I actually prefer Mickey's Christmas Carol if only because it's shorter.

But if we're just talking about versions that are relatively accurate to the source, aren't parodies, and don't replace the characters with anthropomorphic animals, then yes: this is the best I can think of.

The depiction of the various characters is about as close as is humanly possible. Sim's Scrooge is particularly well done, both as the curmudgeon and as the repentant festive do-gooder at the end. Most of the minor parts are good, too, though Marley was a bit ridiculous as a ghost, and they overdid Tiny Tim (as does everyone). The spirits are limited by the effects of the era, but the actors did good work with what they had.

In order to pad out the running time, the script included several new scenes fleshing out Scrooge's relationship with his sister and Marley, as well as some back story on his business dealings and rise to prominence. All of this was decently executed but ultimately unnecessary. It dragged out the story, but I suppose that was the intent: as Lindsay's remarked in the past, this really isn't a movie-length narrative.

If you're looking for a classic Scrooge, this is probably the one to see. But I'm not sure there are that many people out there who really need to sit through such a thing. One of the things I've learned from watching multiple incarnations of this story, along with various parodies and actually reading the damn story, is that I already knew the entire thing.

I have a feeling I'll be relearning that lesson again and again over the next few Christmases, too.
50's Classic Erin Snyder Fantasy Horror Movie