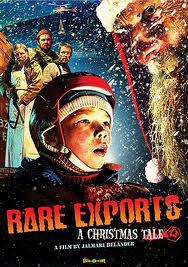 I just watched an awesome movie. Here's what I knew going in: It's a Horror/Fantasy movie about Santa, it's from Finland, and everyone on the internet loved it.

If that is enough to convince you, be off with you to your Netflix queue or your to-watch list! It has occasional bits that are slower than any film made in America would have, but it's a fantastic film.

The more detailed premise runs as follows: Pietari is a young boy in a remote town on the Russian border. As the movie opens, he and his friend are spying on some Americans who are excavating something on the other side of the fence. Pietari becomes convinced that the site is where Santa Claus (old-school baby-eating Santa) was trapped, and that they'll all be in danger if he gets out.

Of course no one believes him, but Christmas is getting closer...

Even though you've passed a set of spoiler tags by coming this far, I am so reluctant to deprive anyone of the experience of watching this without knowing what will happen. It's so great.

If there's any flaw in the film, it might be that occasionally I was thrown by how fast (or just how) some characters knew certain things or accepted new information, but it's a very minor detail. For horror skeptics like me: One thing that I loved was that as the situation grew darker, the film really ramps up the black humor. By the end it's almost an R-rated fantasy action-adventure flick. Here's a less horror-looking movie poster:

The movie is based on two excellent, funny short films by the same director, but I don't recommend you watch them until after you see the full movie; otherwise it gives away some of the twists.

I don't quite know what else to say except that I thoroughly enjoyed this quirky, creepy, awesome little film.
2010 Adventure Fantasy Highly Recommended Horror Lindsay Movie