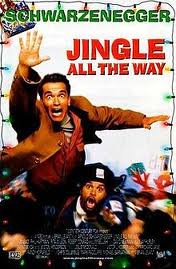 At some point I reached an important realization about this movie. It wasn't that I was watching a bad movie - I knew that going in - but rather that the movie was the wrong movie. I don't mean that I wasn't watching the movie I'd set out to see - for whatever reason, I actually chose to put this on - but that the filmmakers had literally produced the wrong film.

See, by all rights, this should have been a Tim Allen vehicle. The lead was clearly written like his character from Home Improvement. Casting Schwarzenegger made no sense.

On the scale of bad Christmas movies, this isn't on the bottom. Before you read too much into that comment, keep in mind the scale we're considering descends into a very deep, very dark pit.

And parts of this movie were actually funny. There's a scene in the middle involving an army of mall Santas running a con selling illegal knock-offs out of a warehouse that's kind of fantastic.

But you'll pay for every good moment by sitting through a dozen cringe-worthy sequences which are so over-the-top, they're painful to watch.

And that's not even touching on this movie's attempt at sentiment. The fact the story hinges on buying Schwarzenegger's devotion to a kid who's kind of a brat doesn't help, nor does the constant over-acting.

The movie climaxes in one of the most outlandish sequences I've ever seen. Lindsay remarked that it had devolved into The Power Rangers Movie: she was right.

Despite the pain, this movie wasn't really boring, a fact that stays my hand from hitting this with a harsher tag. Nevertheless - and I don't think this will come as a shock to anyone - you certainly don't need to sit through this.
90's Action Comedy Erin Snyder Movie Sucks