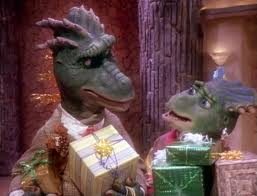 God, this series is weird. Part of me wants to see more, just to see if my memories are accurate. There's no question that this show had guts (the last episode ended with the extinction), but without seeing more I'm not quite ready to render a verdict on whether the show was actually good.

This is the only episode of Dinosaurs I've seen in years, but it provides a good example of the dilemma I run into when thinking about this show. On one hand, it's a fairly scathing criticism of capitalism and consumerism. On the other, it's about as subtle as a rampaging T-rex.

The premise is that, due to its importance in their lives, the dinosaurs celebrate the invention of the refrigerator with the same significance (and more or less all the same trappings) as Christmas.

When Earl's Refrigerator Day bonus doesn't materialize, the family winds up having to make some hard choices between material objects (represented by gifts) and spiritual fulfillment (symbolized by their refrigerator).

There are a few laughs, mostly at the very end, and the puppetry, overseen by Brian Henson, is pretty neat. On top of that, it was bizarrely fascinating to realize that Kevin Clash (of Elmo fame) voiced the baby. However, the heavy-handed nature of the messages is a lot to put up with.

Despite the fact the whole thing was kind of surreal, I can't quite recommend this particular episode.
90's Comedy Episode Erin Snyder Puppet