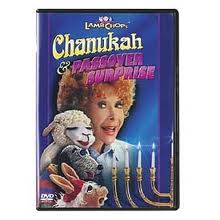 Shari Lewis, the late ventriloquist and puppeteer behind Lamb Chop, was a beloved entertainer. That makes this a tad awkward, because this special was a steaming pile of shit.

To be fair, Lewis is a phenomenal ventriloquist. But her sock puppets kind of suck, the writing is idiotic, and this thing makes little to no sense. The main plot revolves around Charlie Horse trying to win a contest by designing a superhero using a computer program which brings his creations to life. There's a subplot about Lewis and Lamb Chop trying to put on a Chanukah party for some washed-up guest stars, but that seemed fairly inane.

The characters are astonishingly stupid, the jokes aren't the least bit funny, and the lessons drag even more than you'd expect.

I appreciate the need for holiday options for Jewish children, but it seems tragic this is the sort of thing trying to fit that niche. Lewis comes off as genuinely talented, and I appreciate that there are people out there who are nostalgic for these characters. But I sure as hell don't understand why.
90's Comedy Erin Snyder Hanukkah Puppet Special Sucks