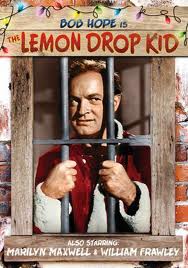 What an odd film. I think I enjoyed it, although it certainly had its share of boring, slow, and inexplicable bits.

The Lemon Drop Kid is a holiday film starring Bob Hope based loosely on a Damon Runyon story. It's mostly notable for being the source of the song “Silver Bells”.

I've read some Runyon stories, and find them fascinating. His work is the inspiration for Guys and Dolls, and The Lemon Drop Kid plays off similar tropes: gangsters both fierce and puppyish, money owed, bets, strong-minded dames, and tangled schemes. The Lemon Drop Kid is closer to the tone of the original stories than Guys and Dolls; it's more bloody-minded, though not by too much.

The central plot follows con-man Kid (Hope) as he tries to raise ten thousand dollars he owes to a murderous mobster named Moose Moran. The scheme he finally hits on involves establishing a charity for elderly women so he can get a license to collect on the street, then conning a bunch of soft-hearted grifters into raising money for the charity as sidewalk Santas. He intends to steal the money to pay his debt in the end, but everything gets complicated. He has a main squeeze, and rivals, and a twisty sort of morality.

Of course it has a happy ending, although how it gets there is pretty forced. Erin objected, but I'm kind of glad that The Kid isn't really redeemed or changed in the end. He's still a twisty-minded con man, but gets out of his trouble while letting the money go to the old-folks home.

I did love the Silver Bells scene. I found it beautifully evocative of the good and bad of city Christmases. I think the dialogue is often strong, and I liked the visual style of the film.

Overall, though, this movie is slow and odd, and too much of the humor is forced or based on ugly camera tricks that I'm not convinced anyone ever found funny.

I'll call it a curiosity more than a classic, but I'm glad I saw it once just for the uniqueness of the experience.
50's Comedy Crime Lindsay Movie Musical