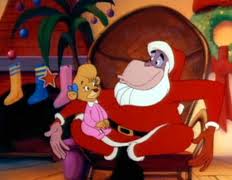 Not much to this little Santa-themed episode. In my opinion, TaleSpin holds up better than many of the Disney Afternoon offerings, mostly because, like Duck Tales, it's spinning its tone and plots out of a old-fashioned pulp sensibility. In other words, it's dated on purpose, not by accident.

TaleSpin also fascinates me because it's loosely based on a live-action television show from the 80's (set in the 30's) called Tales of the Gold Monkey. Only with the character designs and voices from The Jungle Book. Why did someone think that was a good idea? Why does it actually kind of work? I admit, I love Sher Khan the ruthless businessman and Baloo as a layabout pilot/adventurer. I like the new characters: Becky and Molly, Kit and Wildcat. I like that the plots are big and pulp-a-licious: hidden temples and secret spy missions and pirates.

Unfortunately, this episode was basically none of those things.

This episode was about Molly trying to ask Santa to make it snow for Christmas, and Baloo tries to keep her convinced Santa is real long enough for him to find a way to grant her wish. It's occasionally cute, but nothing special. Oh well.
90's Adventure Comedy Episode Lindsay