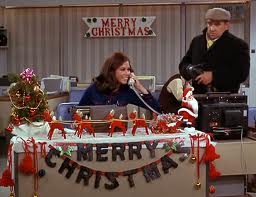 This isn't much of an episode if you're unfamiliar with the show, and even if you are it's just fine. I found it sweet and amusing, but not compelling in any way.

The plot follows Mary first learning she has to work on Christmas, and as soon as she comes to terms with that emotionally, she gets conned by a co-worker into covering his Christmas Eve shift too. Of course, everything turns out merry and bright, if not what she had planned, so all is well.

I actually like the idea of this episode a lot more than the execution. It's true to the idea of the series, following a young woman making her way in a new life in a new city. And sometimes working in the industry you want to work in means you have to work holidays. The feeling of co-workers and friends coming together because you can't be with family isn't dated at all. Some of the humor... is.

I also liked that the majority of the jokes in the dialogue were played to the other characters, rather than for the audience. I don't know, it all felt very natural and slice-of-life to me.

That doesn't mean that it wasn't fairly boring. Slice-of-life usually is.

This doesn't get a strong recommendation from me either way. I think it is perfectly appropriate that Hulu picked it as part of a series on Retro Christmas, though.
70's Comedy Episode Lindsay