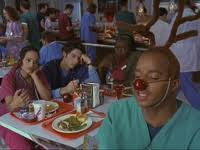 I've seen some great episodes of this series, but I think they were mostly from later seasons. This one, while decent, wasn't anything special.

Like most episodes of most sitcoms, this one follows a couple different stories that are developing in parallel. I counted three main plot arcs: one following J.D., who's been drafted into filming a childbirth, a second that followed Elliot, who's trying to track down a pregnant teen in need of medical care for reasons too contrived to go into here, and a third revolving around Turk, who's lost his faith because he had to work a night shift during a bad musical montage.

Some of it was interesting, but none of it really hooked me. The characterizations were far too over-the-top to be relatable, let alone believable, and the set ups felt forced. There were a few dream sequences - one of this series's signatures - but mostly they felt random and unconnected.

Overall, the comedy was good, though very few of the jokes bordered on genius. The drama was quite a bit worse. It's clear they were going for the right balance, but they missed the mark. The character arcs felt cheesy and melodramatic, almost bordering on soap opera at times. The story did come around at the end and offer a satisfying finish, but it was certainly nothing spectacular.

I know for a fact there are far better episodes of this show. There's no reason to go out of your way to see this one.
00's Comedy Dramedy Episode Erin Snyder