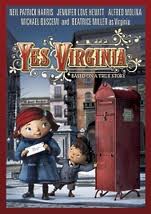 There is, inside of me, a swell of rage and hatred, and it's all thanks to the 2009 CG production, "Yes, Virginia."

Now first off, I want to acknowledge what's good about the special. And, as much as I hate to admit it, there's a quite a list. The animation looks good, the designs are generally inspired, the dialogue was competently written, and the voice acting - featuring both Doctors Horrible and Octopus - was pretty solid.

So why then does this special make me angrier than anything else I've seen this year? Because of what it is, what it does, and why it exists. I appreciate that most Christmas specials are designed to make money - hell, it's part of what I love about the holidays - but generally those specials are direct in their strategy. A special's produced and sold to a network, advertising revenue changes hands, and on the back-end maybe DVDs are produced. It might not be charitable, but at least there's something honest about the system, something pure.

"Yes, Virginia," on the other hand, was dreamed up by Macy's, along with their advertising agency, as a tie-in to their existing "Believe" campaign and to create a mascot based on the historical figure of Virginia. It'd be like if McDonalds had funded a Christmas special staring Ronald McDonald right before introducing him as their symbol.

Now, let's discuss what this special does with the historical figures involved, along with the famous editorial, because that pisses me off even more.

This isn't the first time that the "Yes, Virginia" editorial has been co-opted into a endorsement of faith, but it still infuriates me. Look. Here's the Wikipedia article about the editorial. If you go there, you'll see a scan of the actual text. You'll notice it's significantly longer than edited versions you hear recited in specials like this thing.

Read it. Read the entire thing.

I'm sick of seeing this editorial abridged into something that appeases the religious right with a message of faith. That's not what it's about.

And it's certainly not about selling sweaters, either.

So, if you're looking for cheap pablum you can shovel down kids' throats, this is actually a pretty good special. I actually mean that - good production values, well made, and all that.

But this shouldn't exist. It's insulting that it does.
00's CG Dramedy Erin Snyder Special