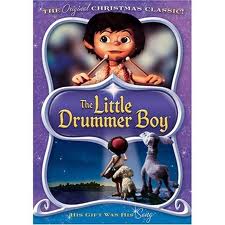 Ugh. I don't have a lot to say about this lame television special. It was boring, banal, and badly produced.

The animation is pretty sub-par, even by the Rankin-Bass standards. The voices are terribly chosen, just incredibly boring. Poorly written dialogue, weird lighting mistakes, completely forgettable musical numbers, and not much more to this.

Okay, I guess you can have a few more details. So, in this highly padded story, the Little Drummer Boy (Aaron) hates humans. We know this because the narration tells us approximately six hundred times, and Aaron says it a few more times for good measure.

Hates. Humans. All Humans. Hates them.

Why does he hate humans? Because his parents were killed, by HUMANS! Yeah, this kid's logic was a little shy of becoming Batman rather than a pint-size misanthrope. Pity - the special could have been a lot more interesting.

There are a lot of awkward phrases and lines in this thing. Like "Show Caravan". It's a traveling circus, but they say "caravan" because it's in the desert. Also: "No one travels the desert at night!" Wait, WHAT? That line made my head hurt.

I hate it when these specials loosely based on songs feel the need to shoehorn in lines of the song as dialogue. It's just so awkward.

Finally, I'm not actually a fan of the song "Little Drummer Boy", but they couldn't even do the song justice. The choir that sings it is nice, but let me explain. The plot of the song is a poor child offering music, the only thing he can give, as a gift to the Baby Jesus, and something about the thought or the spirit being what counts. No argument there, right? Except Aaron the misanthrope has a MAGIC Drum. It controls animals. So yeah, actually, playing a MAGIC drum is kind of a great present. Plus, he doesn't do it out of the goodness of his heart, he does it as a bribe to get Jesus to use his baby magic to save his pet lamb, who had just been conveniently hit by a chariot. And it works. Because Baby Jesus is a sucker.

Sure, the narration gives you some blather about finding joy or forgiveness or something, and I guess Aaron learns to hate people less. But really, this is a story about how if you happen to have a magic drum, you should look out for unscrupulous circus people, but you can use it to get what you want out of life.