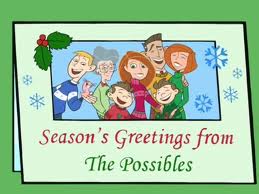 I saw several episodes of this series back in 2002/2003, but stopped watching before this episode aired. Kim Possible, for those of you who don't watch enough cartoons, was a Disney animated series about a super-spy in high school. Elements of both The Powerpuff Girls and Buffy: The Vampire Slayer can be felt, and its creators worked on the criminally underrated Sky High.

This Christmas episode was almost entirely comedy, focused around Ron Stoppable (Kim's partner) and Drakken (her bumbling nemesis). Normally, that might grate on me, but here it seemed to work. The writing was snappy and clever, with the exception of a running gag about X-Treme sports that didn't age well.

The episode did a good job juggling the absurdity of Kim's world, along with the trappings of holiday cheer, and while the result wasn't Earth-shattering, it was absolutely entertaining.

If you're flipping through the channels and stumble across this, I definitely recommend giving it a chance.
00's Action Comedy Episode Erin Snyder Spy Superhero