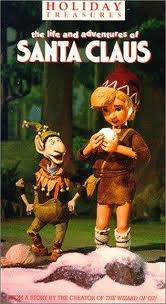 I just recently read the short story, so a lot of watching this special was spent comparing it to the source material.

It compares pretty well, I think.

So far as I know, this is the last of the Rankin-Bass holiday specials, so the production values by this point were pretty high. The animation is smooth and the character designs are pretty great.

The special opens with the Council of Immortals meeting to decide Claus' fate; his life story is then told within that frame. I found the Immortals much more interesting and full of gravity here than in the book. It probably doesn't have anything to do with me being conditioned to like anything set to the same kind of 70's style faux medieval folk-rock that was also used in The Hobbit, Flight of Dragons, etc. Really.

The music is overall passable, although after the majesty of the opening the rest of the soundtrack feels sort of pale and trite.

In the end, I have to admit that this didn't quite live up to my memories of it. It's still an interesting piece, and a good adaptation of the story. But I can see why this one never became as popular as the earlier specials.
80's Fantasy Lindsay Special Stop Motion