The Adventures of Sherlock Holmes: The Blue Carbuncle (1984) 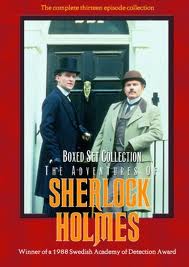 Yeah, I sort of suckered Erin into doing this one. But it is a Christmas episode! So it COUNTS.

Despite an early misstep with an unintentionally silly montage running under the opening episode credits, this is a fantastic episode. A solid adaptation of the story, like most episodes of this series, it stays true to most of the original, while breaking up monologues into more entertaining dialogue and expanding the roles of the minor characters. A highlight here is that John Horner, the man accused of stealing the jewel, is given a wife and kids and a little emotional plot of his own, to give the episode a bit more holiday poignancy.

The Blue Carbuncle (about a stolen jewel found in a Christmas goose, and how Holmes traces it back to the culprit) is not one of my very favorite Holmes stories, but it is a solidly entertaining one.

I loved re-watching this episode; it really showcases why Jeremy Brett was, in my opinion, the ultimate Holmes. All his charm, his wit, his hypnotic presence, his disdain for people who are not useful, his sense of justice and his tenacity - all are highlighted here. It also is a great episode for the banter between Brett's Holmes and David Burke as Watson. I love Burke's Watson, too, his easy affection and sense of humor.


For holiday elements, there are plenty of decorations and of course the story is explicitly set at Christmas. More impressively, the score for this episode is continually weaving in lovely variations on God Rest Ye Merry Gentlemen, which I think keeps a nice haunting holiday tone. It's even mixed with the theme song for the ending credits.

I recommend this entire series for fans of Holmes, but I recommend this to everyone as a holiday-tinged breath of fresh air in a cloying season.
80's Episode Lindsay Mystery