Holiday Brit-Coms: Keeping Up Appearances: A Very Merry Hyacinth (AKA The Father Christmas Suit) (1991) & Are You Being Served?: Christmas Crackers (1975)

By Lindsay - December 21, 2011
I'm more of a fan of British Sitcoms than Erin is; I watched them a lot on PBS when I was in high school, and again when I worked nights when we lived in DC.

However, I, uh, wouldn't start with either of these episodes. 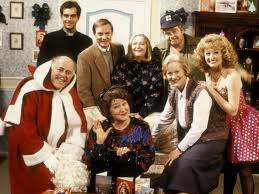 Keeping Up Appearances, in case you don't know, is a comedy of manners and class about a woman (Hyacinth Bucket) born to a lower-class family, now living a middle-class lifestyle while reaching for upper-class respectability. She, of course, constantly postures and overreaches herself, and annoys those around her to no end. I rather like how indefatigable she is, though.

The Father Christmas Suit (called A Very Merry Hyacinth in US release) is a highly farcical episode, that definitely relies on the viewers knowledge of the characters prior relationships for its humor. As seemingly simple a thing as handing out presents in a church charity drive becomes a fiasco when Hyacinth decides just how it has to be perfect. It isn't a great episode, though. Just mediocre at best.

(Erin is going to roll his eyes at me that I give it that much credit.) 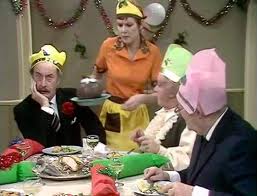 Are You Being Served? is about the staff on one floor of a large department store, their commentary on each others' lives and the ridiculous schemes of management to increase sales. I hit Are You Being Served at the exact right time as a teen, when I was most amused by double entendre. Basically the entire show is just a string of dirty jokes and running gags. I don't find it inherently as funny as I once did, but it still amuses me.

Christmas Crackers is a very “British Christmas” episode. There is an extended lunch scene involving said crackers, a joke about christmas pudding, etc. Plus the whole thing wraps up with a somewhat illogical song in silly costumes. Which is a very characteristic thing for the show (the costumes more than the song). The episode doesn't have much of a plot, more a series of humorous scenes. It made me smile and giggle here and there, but it isn't a fantastic example of the show.
70's 90's Comedy Episode Lindsay