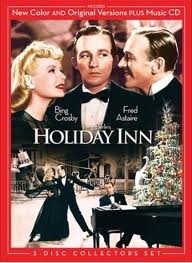 You could make a case that Holiday Inn isn't actually a Christmas movie, since it actually takes place over an entire year and devotes a substantial amount of time to several different holidays. The movie does begin and end at Christmas (actually, it encompasses three Christmases, thanks to a sort of preface starting a year before the real action starts), but the film's real credentials are a tad more specific.

Holiday Inn's real claim to fame comes from one of its songs, a short piece called "I'm Dreaming of a White Christmas." Maybe you've heard of it.

The movie's plot centers around a pair of entertainers competing for the affections of a woman. The movie's title (and gimmick) revolves around an inn opened by one of the two competitors which is only open during holidays.

The movie has some decent twists and turns, and some good song and dance numbers. It cleverly pushes against the boundary of the fourth wall when movie producers create a supposed facsimile of the inn in question, in effect exposing the reality behind an earlier scene. Like I said, it's clever, but of course it's been done since, so don't expect something you haven't seen.

Well, actually the movie does offer one sequence you probably haven't seen, unless you're a fan of the period. In fact, if you watch this on TV, you still won't see this particular sequence.

Remember how I mentioned this highlighted several holidays? Well, Lincoln's Birthday made the cut. If you think that's a good thing, then you might not be familiar with the 1940's. The musical number is performed in blackface, which is about as horrific as you'd expect. What's really weird is that the number offers pretenses of sensitivity. Ostensibly, the song is meant to be about the plight of slaves, and it almost seemed as if the filmmakers thought they were portraying African-Americans in a positive light. However this only draws attention to how racist the portrayals actually are (and they are really, really racist).

Of course, all of this elevated the sequence to being the most fascinating in the movie, albeit for entirely different reasons than the producers must have intended. It's like driving by an accident: it's horrible, but you can't look away. For those brief moments, at least this thing held my attention.

Which brings up the other major issue: this movie drags. There are some good numbers, but the plot is thin (characteristic of the genre, I'm afraid), and it takes forever for the end to arrive.

I wouldn't recommend Holiday Inn to anyone who's not already a fan of the genre. Old movie musicals are definitely an acquired taste. To be honest, I don't think I've quite acquired it yet.
40's Comedy Erin Snyder Movie Musical