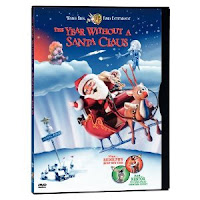 Of all the Rankin/Bass specials I've seen this year, I think I like this one least.

Oh, it's not all bad by a long stretch.  The Snow Miser and Heat Miser are fantastic, inventive characters: hell, they're the reason everyone remembers this as fondly as they do.

The thing is, those two are just about the only aspects of this special that are any good.  The rest of it is an incoherent mess.  There's no real rhyme or reason for anything that occurs, and the vast majority of characters are just bizarre and random.  There's a song that emotionally blackmails a kid into believing in Santa Claus I find particularly disturbing.  I'm all for encouraging kids to hold on to imagination and fantasy, but that doesn't mean it's okay to suppress rational thought and skepticism.

I like the idea of giving Mrs. Claus a chance to shine, but she mostly comes off as incompetent here (not to mention reckless: she almost gets a couple elves and a reindeer killed, then she later takes a child into harm's way).

For all its faults, the Miser brothers are a lot of fun, and their song has rightly gone down as a classic.  Plus, I love the version of Mother Nature who shows up.  She's sort of a sweet, kindly grandmother, who doesn't hesitate to emphasize her "suggestions" with bolts of lightning.

And that's how she talks to her kids.

Unless you have a need to relive childhood memories, I don't suggest sitting through the whole thing.  Sure, the Miser scenes are pretty fantastic, but that's what YouTube is for.
70's Erin Snyder Fantasy Musical Special Stop Motion