Beauty and the Beast: The Enchanted Christmas (1997) 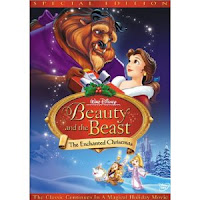 This is from the first round of direct-to-video sequels that Disney was beginning to crank out in earnest in the 90's.  As such, it's kinda bad.

I think it has enjoyable moments, as well as some so-bad-it's-funny parts, but Erin despised it. That is a totally fair reaction.

Given that Beauty and the Beast is sort of a self-contained story, the plot of the movie is a flashback that takes place in the middle of the original.  Sounds great already, doesn't it? The villain is a computer animated pipe organ, of all things, that fears Belle threatens his "special relationship" with Beast.  Yeah, it's kinda weird.

I felt for the voice cast during some of the worst scenes. All of the actors from the original movie reprise their roles, plus Tim Curry (as the organ, naturally), and Bernadette Peters as a decorator turned Christmas Angel.

There are moments of really terrible writing, acting, like most of the lines given to Beast throughout.  Especially when the filmmakers decide to expand on the whole "prince acting like a jerk before the curse" scene.  That is downright excruciating, but it's followed by some actually impressive animation of the fairy.

There are other cute moments, and other places where the animation is well done, but they're interrupted with humor that's out of place, or characters being badly modeled.  All of the CG was hideous.  I didn't hate the main theme, "As Long As There's Christmas," but all the other songs were just terrible.

Unless you're going to get drunk and have a girly bad-movie-musical sleepover, I'd skip this one.
90's Fantasy Lindsay Movie Musical Sucks