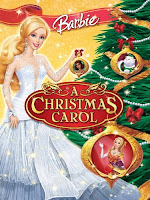 Erin is going to take this movie WAY too seriously, so I'm offering a rebuttal.

It isn't good, of course it isn't good.  It's a CG Barbie movie.  But it's not crime-against-humanity levels.  It's pink and girly and very G-rated.  They gender swap all the characters (which is more than fine with me) and make the story more about the sin of vanity than the sin of greed.  Frankly, except for a few particularly painful scenes, I'd put this squarely into “so-bad-it's-good”.  Not quite good enough to seek out, but pair it with Beauty and The Beast: Enchanted Christmas, some sort of pink champagne, and a room full of enthusiastic young women, and you might have a very amusing time.

I mean. it's produced by Mattel Entertainment!  HA! The DVD has a sing-along mode.  The main character has a fat tag-a-long cat named after a different Dickens book.  The Ghost of Christmas Past is a completely manic Tinkerbell. The whole thing is nuts.

The animation is cheap, but not as awful as I expected for a DVD movie based on a doll.  The children are scary looking, though.

I love that Eden (Ebenezer) doesn't believe in the ghosts for some time.  It amuses me.

Be aware: the spirits are more like good fairies than ghosts, and the frame scenes are pedantic and annoying.  The melodrama is poorly handled, they spend way too long in the past without enough to do there, the film is overall too long, there's more than one scene that crosses right over into creepy, and there is zero poignancy to the ending.

If you are planning that aforementioned bad girly holiday movie night, you could do worse than Barbie in A Christmas Carol.  Make sure you provide your guests with liquor, and I advise you to sing along.
00's A Christmas Carol CG Lindsay Movie Musical So Bad It's Good