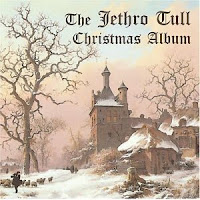 These days, I've got a lot of holiday albums, representing just about every imaginable take on Christmas you can imagine.  Yup.  At this point, I've heard it all.

And without hesitation, I can say that this is my favorite of the bunch.  I've had this for a few years now, and I keep at least a handful of the tracks in several set lists I play all year round.  There's some phenomenal music here.

The album was in part brought about by the band's realization they already had a surprising number of songs related to Christmas.  As a result of being written over the course of four decades, the music is highly diverse.  The album has several of my favorite re-imagined holiday songs, new versions of some classic Tull songs, and some others that aren't so well known.

It's that last category that particularly impresses me.  The best song on the album, in my opinion, is Jack Frost and the Hooded Crow, a beautiful little piece you need to check out.  The re-imagined God Bless Ye Merry Gentlemen isn't far behind, though, and Last Man at the Party captures the isolation of the season as well as anything I've ever heard.

The album itself doesn't seem to be in production, but you can find used copies pretty cheap on Amazon

or Ebay.  I strongly suggest at least checking out the samples.
00's Erin Snyder Music