By Lindsay - December 20, 2010
Cross-Posted from The Blue Fairy's Bookshelf 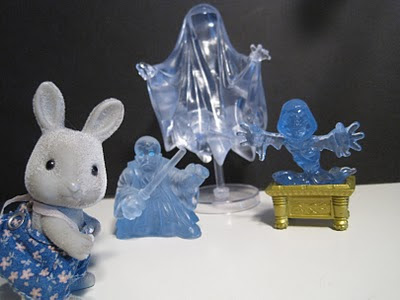 A Christmas Carol
Charles Dickens, 1843
With all the different adaptations I've been watching recently, I thought it was time to re-read A Christmas Carol.
I remember reading this in grade school, although I think that we read the dramatization, not the prose.
The most striking thing to me is how little is different. There are plenty of cute turns of phrase, clever bits of writing, but most adaptations of the story really do hit all the high notes. Particularly having just recently seen the Muppet Christmas Carol, I didn't think I added much to my understanding by reading the actual text.
A few nice moments are missing from the films. I liked the sweet moment between Scrooge and his sister in the past, it really pushed the early softening of the character. There is a good comedic moment in the narration that precedes the second spirit.

Now, being prepared for almost anything, he was not by any means prepared for nothing; and, consequently, when the Bell struck One, and no shape appeared, he was taken with a violent fit of trembling.

I also think the description of the Spirit of Christmas Past is particularly good, and the idea that it has a constantly changing appearance certainly makes that aspect resistant to film interpretation. I like that the Spirit somehow embodies all the people of Scrooge's past. I don't really understand the scene where Scrooge puts him out like a candle.
Note: it is not the adaptations that push Scrooge to change quickly. I was surprised how almost instantly he becomes willing to change, and how soon he is thanking the Spirits for their help.
The prose is light and trips along, and I'm amused by some of Dickens' odd tangents, bored by others. One nice observation:

“This is the even-handed dealing of the world!” he said. “There is nothing on which it is so hard as poverty; and there is nothing it professes to condemn with such severity as the pursuit of wealth!”

It was good, without being surprising or compelling. This story has become such a part of culture that reading it now is fraught with déjà vu. It is important historically, but I don't think I'll feel the need to read it again in a hurry.
Next year I'll just watch the movie again.
A Christmas Carol Book Lindsay